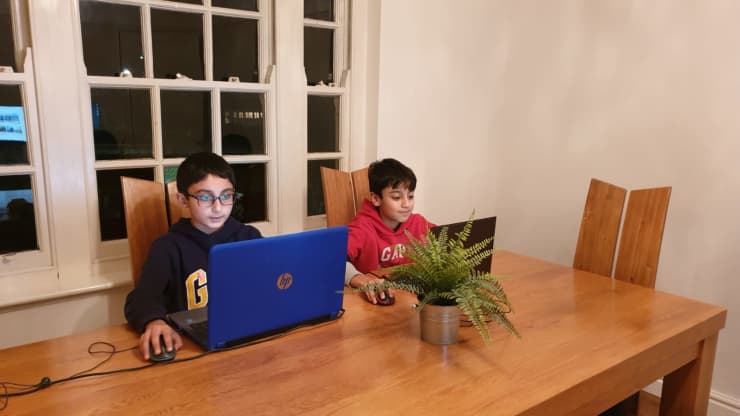 Benyamin Ahmed isn’t your average 12-year-old.   When he’s not at school, he enjoys swimming, taekwondo — and learning how to code. At just 5 years old, Ahmed began programming after watching his father, Imran, work as a web developer.

He started with HTML and CSS, and continued to advance his coding skills, later learning JavaScript and other programs. But lately, non-fungible tokens, or NFTs, and the smart contracts, or collections of code that power them, have caught Ahmed’s attention.

“I first learned about NFTs earlier this year,” Ahmed, who is based in London, tells CNBC Make It. “I got fascinated with NFTs because you can easily transfer the ownership of an NFT by the blockchain.”

NFTs are unique digital assets, including jpegs and video clips, that are represented by code recorded on a blockchain, which is a   decentralized digital ledger. Each NFT can be bought and sold, just like physical assets, but the blockchain allows for the ownership and validity of each to be tracked.   Ahmed was excited by the technology and decided to create an NFT collection of his own.

His first NFT collection, which he launched earlier this summer, consists of 40 colorful, pixelized avatars called Minecraft Yee Haa, that “I created after spending too many hours playing      Minecraft,” Ahmed says. He created the artwork and coded each himself, he says. The collection didn’t immediately sell, but that was OK. Ahmed saw the project as more of a learning experience than a “money grab” and wanted to continue to create.

In June, he began to code Weird Whales, his second NFT collection, which features 3,350 pixelated whales, each with distinct traits. The project fused together a sort of meme, using the image of a whale, with traits similar to that of the iconic pixelated CryptoPunks, one of the first NFT collections to exist. The project cost $300, Ahmed says, which mainly consisted of paying gas fees, which are charged to blockchain verify each NFT.

Along the way, Ahmed learned how to code the collection from online tutorials and mentors he met on Discord communities, he says. One of the developers behind another NFT project called   Boring Bananas sent Ahmed a script to use as a template for coding Weird Whales, his father Imran says.

“My brother and my dad were very excited and fascinated at how they came out,” Ahmed says. “We did some work on the website and the smart contract and posted a thread on Twitter.”

After launching in July, the entire collection sold out in nine hours, and Ahmed made over 80 ether in one day. Since he has held his profits              in ether, that sum is worth over $255,000 with today’s pricing. He then earned an additional 30 ether, worth over $95,000, from the resale market, since Ahmed earns a 2.5% royalty on each secondary sale.

Ahmed has made over $350,000 to date, and by the end of August, projects his total earnings will be over $400,000. As of now, Ahmed doesn’t have a traditional bank account, only a cryptocurrency wallet.

“I plan to keep all my ether and not convert it to fiat money,” Ahmed says. “It might be early proof that, in the future, maybe everyone doesn’t [need] a bank account and just has an ether address and a wallet.” (However, he may soon create a bank account for tax purposes, he says.)

Going forward, Ahmed is working on another NFT project and predicts that many more successful NFT collections will have a meme component.    “I think memes have significant value in this space, as a lot of   projects have some kind of meme-link to it,” Ahmed says, like how meme-inspired dogecoin recently surged in popularity. “I think memes play a big part in this space.”

The key, however, will be owning his IP, or intellectual property, he says. To do so, Ahmed’s father has been in contact with lawyers to trademark Weird Whales and other upcoming projects. “When people buy Weird Whales, they’re investing in me and my future,” Ahmed says. “If I carry on as I’ve been, I might end up like other tech entrepreneurs out there like Elon Musk and Jeff Bezos.”