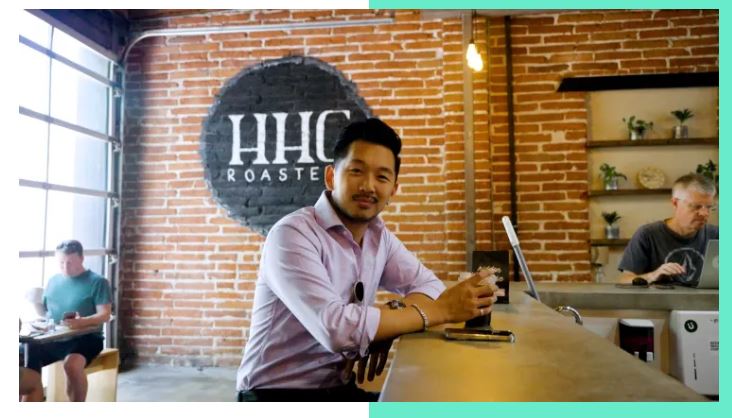 Moses Lin never thought he’d make any money as a musician. Once, early in his career in 2016, he played a coffee shop for three hours and got $3 in tips.

“I was so discouraged, I literally went home and cried,” Lin says. “I was like, I’m never going to make a living performing music. This is never going to work out. And I almost just threw it all away.” By 2021, though, Lin worked full-time as a destination wedding guitarist. He played around 40 to 50 weddings that year and brought in about $175,000 before tips.

His work takes him to all corners of the U.S., from New York to Hawaii, and even Cancun, Mexico. The best part: Playing weddings “doesn’t even feel like working. We’re just partying.” Lin has invested most of his wedding income in the last two years into real estate. He’s currently the landlord for four properties in Little Rock, Arkansas. He also bought his own home in Anaheim, California, this spring.

A college dropout gets a call from Disney.
Lin grew up in the suburbs of Chicago and spent much of his childhood at church, where his dad was the pastor, and his mom was the pianist. He started playing the piano at age three and, by high school, picked up a guitar. In 2011, Lin joined the U.S. Marine Corps to pay for college and earned a spot to play guitar in the Marine Corps band.

“My parents didn’t have any money for my college,” Lin says. “I knew that if I went to college and took a traditional route, I’d be hundreds of thousands in debt. And I didn’t want to start my life that way.”

After his enlistment ended in 2014, Lin attended the Vanguard University of Southern California. He started a YouTube channel, where he posted acoustic covers of pop songs and also began teaching guitar lessons for money. By his senior year in the spring of 2017, Lin decided to quit school with just one semester left and give a full-time music career a shot.

He gave himself the summer to put up more YouTube videos, take on more students and play more gigs. Though the money was unstable, and he sometimes relied on unemployment insurance and food stamps, Lin felt good about spending his time. I knew that if I went to college and took a traditional route, I’d be hundreds of thousands in debt. And I didn’t want to start my life that way.

By the end of the summer, he got a call from Disney. They’d seen his YouTube videos and wanted to hire him to play throughout Disneyland’s hotels and restaurants. Lin took the job and decided he was never going back to college.

Moses Lin plays the guitar at Downtown Disney.
Months after Moses Lin dropped out of college, a Disney representative found his YouTube channel and recruited him to play in their parks.  Lin played his first wedding as a favour to a friend in June 2017. He was instantly hooked. “I showed up, and it was the funniest thing ever,” he says. “At a wedding, everyone’s drunk; everyone’s having the time of their lives. It’s incredible.”

Lin decided to try it again and make money from it, charging $250 for his first wedding booking — “ridiculously cheap” in hindsight because he based it on the going rate for restaurant gigs. He realised his mistake after asking another wedding musician how much they made for playing cocktail hour, “and they said $1,200,” Lin recalls. “I went home, doubled my pricing immediately, and started booking more.” Even as he raised his rates, the client requests kept coming.

Moses Lin plays for the crowd at a wedding.
Moses Lin started as a wedding guitarist by playing at a friend’s wedding. Lin now charges $4,000 to $6,000 per wedding, depending on when the couple wants him to play. His clients pay for his travel and generally tip around $50 to $100. Lin also pays an assistant around $250 per gig to film his performances for social media.

He says a big misconception of making a career in music means putting songs on Spotify or booking shows at venues, “but that’s not how you make money. The big secret is weddings. That’s where people pay for music.”

How he spends his money
Here’s how Lin spent his money in June 2022: Housing: $4,980, including $4,755 for a mortgage on his 3-bedroom house and $225 on utilities
Discretionary: $1,000 on home improvement, shopping and hobbies Food: $398. Lin spends roughly $800 on food per month, but about half is on business meals with clients or networking, which he can expense.

Gas: $223. Lin writes off his monthly car payment as a business expense but covers gas out of pocket. Insurance: $154 for home and car insurance. He gets free health insurance through the VA. Phone: $50 Lin bought his primary residence in Anaheim in the spring of 2022 for $901,000 and put about $30,000 down.

He says he takes “a detailed approach” to his finances, working hard to separate his personal versus music versus real estate finances.  Lin’s budget is pretty straightforward and includes housing, utilities, gas, insurance and phone bills. In June, he spent about $1,400 on food and entertainment and used an app called Dollarbird to track his spending.

Lin has no personal savings, brokerage accounts or retirement funds. He panicked during the pandemic dip in early 2020 and withdrew everything he’d shored up, incurring penalty fees and losing out on market swings. He’s also wary of cryptocurrency. Instead, he takes the roughly $10,000 in profit from weddings per month and funnels it into an account earmarked for buying another investment property. Lin estimates approximately 80% to 90% of his net worth is tied up in the real estate.

Long-distance landlord
Lin became interested in real estate investing in 2014 and bought his first property in May 2020 as a “pandemic pivot” when Covid restrictions slowed his wedding gigs. He did some research and landed on Little Rock, a tertiary market where he saw a lot of potentials: “The rents are solid, the property values are low, so there’s a lot of cash flow to make.”

Lin found a 4-bedroom house online for $120,000 and put down 20%, plus another $10,000 to renovate it. All told, including closing costs and other fees, Lin spent about $40,000 to buy his first Little Rock property, which he paid for using his wedding earnings. He put the house on the rental market charging $1,425 per month, and quickly found a tenant. He enjoyed the process so much he decided to buy a second property before the end of the year.

Today, Lin owns and rents out four properties in Little Rock. He bought and renovated them sight unseen and visited for the first time in May after booking a wedding in the area. Lin didn’t turn a profit on his rental properties in 2021 but is in it for the long haul.Lin pays a property manager to handle things on the ground, “so I’m able to focus 100% of my attention on weddings [and] on music, and real estate makes money on the side. My master business plan is to make money in weddings, dump it into real estate, and let that grow itself.”

Lin aims to buy roughly two properties a year. He waits until he’s saved up the $50,000 to $60,000 for upfront costs before he fires up Zillow, “otherwise, you get FOMO,” he says. “You look at a property and think it’s perfect, but you can’t afford it. You don’t want to be where you’re overstretching yourself to invest.” He has about $30,000 saved to go toward his next property, though he’s waiting to see how the economy fares before making any moves.

Millionaire by 30
Lin’s next big goal is to have a net worth of $1 million by the time he’s 30. His end game in real estate is to get to the point where the passive income from his rentals pays for all his bills. He figures at his current pace and will reach that in the next three to four years. You don’t want to be where you’re overstretching yourself to invest.

Then, Lin says he’ll use all his wedding earnings to fund his lifestyle. He eventually wants to hit $200,000 of wedding income in a year. “There are hundreds and hundreds — millions — of weddings every year, and there are billions of dollars spent in this industry,” he says. “There’s so much money for me to take out.”

He also hopes to go international: “I’d love to do a wedding in Italy or Greece.” Moses Lin plays the guitar during a wedding ceremony. Moses Lin is invested in growing his wedding guitarist clientele. He hopes to break $200,000 in bookings within a year and even play abroad.  Lin has no plans to return to college. “There has never been a moment where I regretted dropping out of college,” he says. “It is by far the best move I’ve ever made in my entire life.”