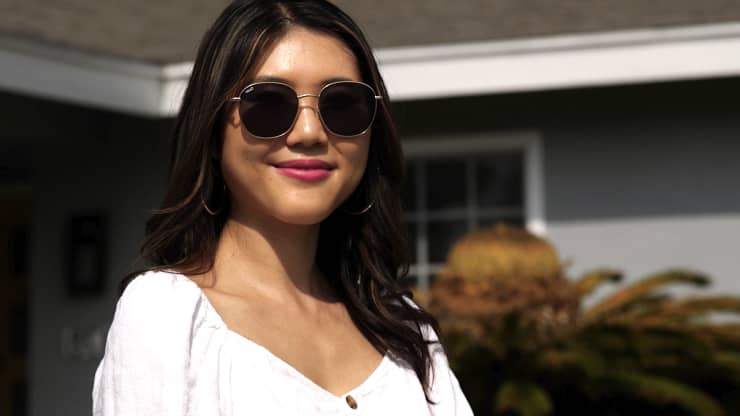 The 27-year-old saved up the $28,000 needed in nine months during the Covid-19 pandemic, after her mother, Carrie Cheng, lost her job and was worried about making her housing payment each month.

Liao and her now-husband, Greggory Bollweg, cut out basically all non-essential expenses to save the money, which she said was made easier by the pandemic’s stay-at-home orders.  She began signing up for credit cards and                                  bank accounts for the new account bonuses and sold items around her house.

She also began dog walking to supplement the $100,000 annual salary she earns at her day job as a senior financial analyst at a medical device company in Orange County, California.   Liao considers it the least she could do to provide her mother financial security.

“It was the best money I’ve ever spent because it made my mom so happy,” says Liao, whose mother now owns her two-bedroom condo in San Diego outright. “There’s no other fulfilling feeling for me than seeing my mom happy.”

It’s always been Liao’s goal to get a stable job in order to help her mom with her finances. Born in Shenzhen, China, Liao moved to the U.S. with her mother after her parents separated when she was 12 years old.

The pair lived in what Liao describes as a shed on a relative’s property in Los Angeles when they first arrived, wearing clothes donated by their church. Neither spoke English, but the Disney Channel became Liao’s language tutor over the next few years.

After two years of living in the shed, they rented rooms in other people’s homes until her mother, who was a college professor in China but sold sunglasses at a kiosk at the mall in the U.S., was able to rent an apartment for just the two of them in San Diego.

All the while, Liao excelled in school despite the language barrier, especially in math. She attended the University of California, Santa Barbara, which was almost completely paid for with financial aid she received via the Free Application for                                  Federal Student Aid (FAFSA). She also qualified for work-study, allowing her to graduate in 2016 without taking out any loans.

Her first few years in the U.S., especially living in the shed, were foundational to Liao’s relationship money, instilling a fierce independence in her, she says. Now, she makes six figures in a field she chose not just because of her aptitude for numbers, but for the security it could provide her and her mother.

“I realized I never want to depend on anybody else,” she says. “I always want to have a sense of independence because I have the money to be myself and and do what I want with my life.”

How she spends her money:—

Liao’s current focus is on building up her savings and investments balances. In addition to funding her own retirement, she also plans to continue to help out her mother. At the time of filming, she had around $23,000 in savings and $85,000 in investments.

He plans to live in the house with the couple when he retires. Bollweg’s mother was their real estate agent, and gave them her commission, which also helped them reach their 20% down payment.

Liao is aware of how lucky she is to have had help from her father. “Growing up, he didn’t really support us with everyday things,” she says. Big gifts are his way of showing up for her now.

Liao and Bollweg, who makes a similar income as an engineer, split most shared expenses evenly, and otherwise keep their finances separate.

“I always want to feel equal,” she says of the decision not to combine finances. “We do believe our money is our own achievement, so we like to be independent and keep the money that we make to ourselves.”

At the end of the summer, Liao and Bollweg wed in the backyard of their Orange County home. It was an intimate, 40-person ceremony, and, true to her frugal nature, the bride handmade most of the decorations and bought her dress for $350. She even did some of the alterations herself.

The largest expenses included the engagement and wedding photos, which cost $1,400, and the food, which was prepared by a local restaurant for around $700. In total, though, they spent under $6,000, split evenly.

As for her career, Liao plans to stay in accounting because of the stability and opportunity for advancement. She also plans to start teaching other people her age about personal finance. She has scheduled sessions with a few clients so far — friends of friends — but has yet to make money from it.

Outside of work, Liao describes music as her “source of happiness in life.” She grew up practicing the piano in churches and her elementary school. As an adult, she printed out the keys on pieces of paper and                                            pretended to play before she could afford to buy a real piano. (She eventually found a used one for $600 on Craigslist.) Recently, she also taught herself the upright bass.

When she thinks of her future, she envisions one free of the kind of quotidian stresses of managing money she grew up with. Instead, she pictures her and her mother living carefree, no longer subject to anyone else’s rules.

“Maybe I could be a musician,” she says. “If I have the money, I can do whatever I want.”