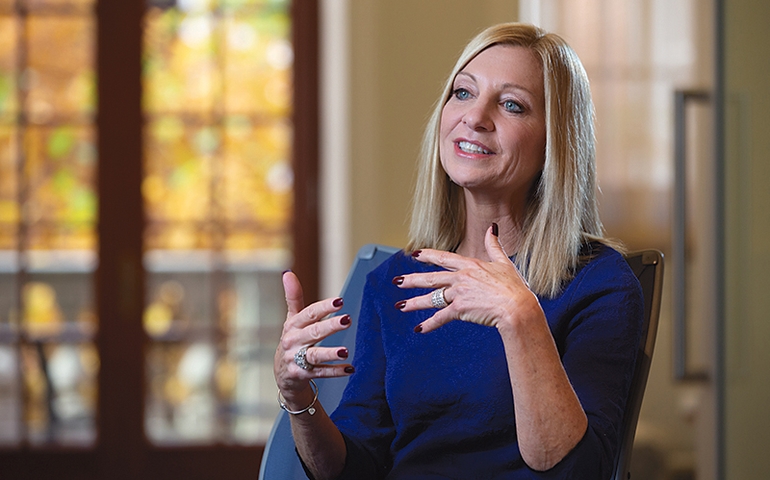 Karen Lynch is one of the most powerful in health today. She has carved out a successful career holding top roles in various health providers and is currently chief executive of pharmacy giant CVS Health. Her position at CVS also makes her the highest-ranking female executive in the Fortune 500.

Karen Rohan Lynch was born in Ware in the state of Massachusetts, United States on December 30, 1963. She managed to overcome a rough childhood after the divorce of her parents and the abrupt death of her mother. She and her young siblings were then raised by their aunt.

Lynch took her early struggles and turned them into inspiration while undertaking her studies. She graduated from Ware Junior Senior High School in 1980 and later obtained an accounting degree from the Boston College Carroll School of Management.

She then pursued a Certificate Public Accountant (CPA) certification from the same university and a Master’s degree in Business Administration (MBA) from Boston University’s Questrom School of Business.

Before obtaining her MBA, Lynch landed her first job at multinational professional services company Ernst & Young working in the company’s insurance department. She would then be involved in insurance for over a decade before being appointed as the president of Cigna in 2004.

A year after her appointment, Lynch also took leadership of the merged Cigna Group Insurance and Cigna Dental divisions in which she held the position for around five years. Founded in 1982 through a merger between                                    Connecticut General Life Insurance Company (CG) and INA Corporation, Cigna has grown to become one of the biggest health providers in the United States.

Cigna is listed in the top 20 of the Fortune 500 and has seen increased annual revenue numbers in the past decade ($160 billion in revenues for 2020).

Lynch left Cigna to become the president of another healthcare company Magellan Health Services. Magellan was founded in 1969 and began as psychiatric hospital chain Charter Medical.

After incurring massive debt and going into bankruptcy in the early 1990s, Charter Medical managed to recover and was rebranded as medical holding company Magellan Health Services. The company was recently acquired by Missouri-based healthcare insurer Centene Corporation for $2.2 billion.

After three years with Magellan, Lynch moved on to become the executive vice president and head of Specialty Products at Aetna. She would be promoted as the company’s president two years later, becoming Aetna’s first-ever female president.

The Connecticut-based health insurance provider was acquired by CVS Health in 2018 for a massive $69 billion. The acquisition intends to integrate Aetna’s medical information and analytics with CVS Health’s pharmacy data, resulting in better-connected care and                                  lower medical costs. Aetna currently has a network of 22.1 million medical members, 1.2 million healthcare professionals, and 690,000 primary care doctors and specialists around the world.

Even before Aetna was acquired by CVS Health, Lynch had already made significant strides as the company’s president. She was mainly responsible for developing strategies in delivering consumer-focused and high-value health care to Aetna’s more than 39 million members. Under her watch, more people didn’t just sign up with Aetna but more hospitals and healthcare professionals also chose the company over the dozen others providing similar services in the United States.

Lynch’s accomplishments at Aetna didn’t go unnoticed. Over the last five years, she had become a regular feature in Fortune’s Most Powerful Women in Business list. She also became the highest-ranking female CEO in the Fortune 500 after she was appointed as CVS Health’s newest chief executive officer in February 2021.

Lynch replaces former CEO Larry Merlo who led the company for 31 years. With the CEO transition going smoothly, Lynch intends to address the immediate COVID-19 situation in the country as well as create more connected experiences with CVS pharmacies and MinuteClinic and HealthHUB locations. She currently owns 80,000 units of CVS stock and has a net worth of $20 million.

Aside from its pharmacy, retail clinic, and insurance services (Aetna), the company also manages CVS Caremark which is a pharmacy benefit management business that provides 24-hour access to CVS pharmacy services and emergency pharmacist consultation to its members. More than 75 million members are currently enrolled with CVS Caremark.

CVS Health finished 2020 with $268.7 billion in revenues, up nearly $12 billion from the previous year. As the U.S. buckled under the effects of COVID-19, the company was chosen as a Federal Pharmacy Program COVID vaccination partner. CVS has so far administered three million vaccines in 40,000 long-term care facilities.

The company’s continued vaccination efforts through its numerous pharmacies is a strategy that Lynch plans on retaining in the foreseeable future.

Lynch is married to The Quell Foundation President and CEO Kevin Lynch. As for her advocacies, she is a strong supporter of women empowerment and believes that there should be more women in corporate leadership roles.

As for women leaders, not many can match Karen Lynch’s accomplishments. But she didn’t achieve them overnight, overcoming childhood struggles as well as spending years developing necessary skills needed for her various roles.

At the end of the day, she is a story of inspiration and determination and is a leader that everyone (not just women) should look up to.