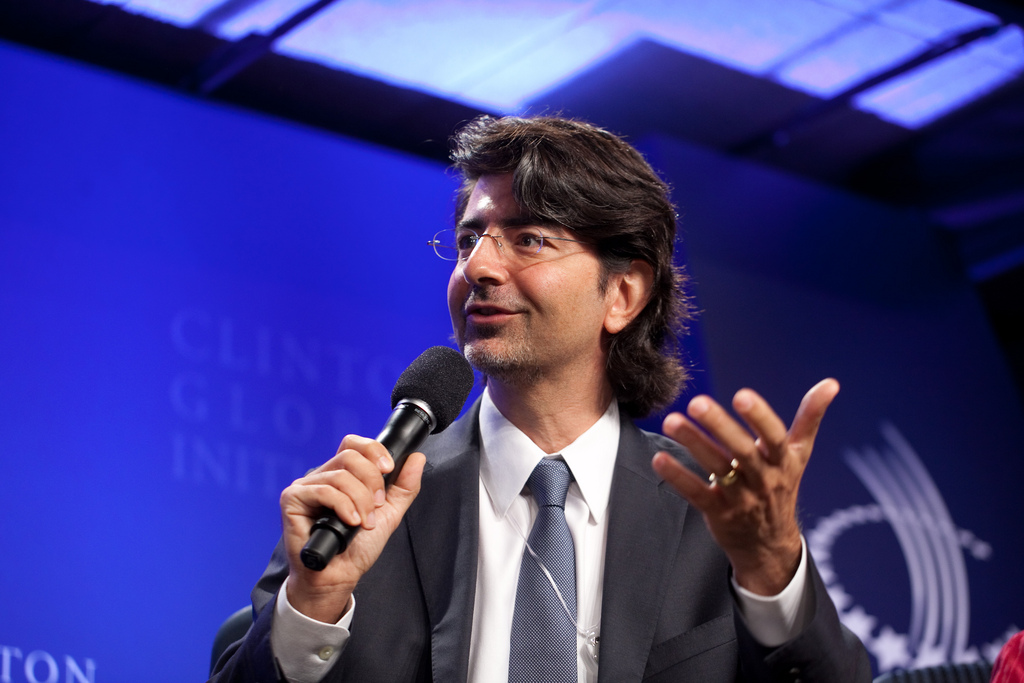 In 2010, he launched an investigating news service, Honolulu Civil Beat. He created a journalism venture called First Look Media in 2014.

As a Philanthropist, he and his wife cordially founded Omidyar Network in 2004 with an aim to expand their efforts beyond non-profits to include for profits and public policy, which would serve the purpose of the philanthropic investment firm.

Pierre was born to Iranian parents, who migrated to France for higher studies. He grew up in Paris and was formerly named Parvez. His father, Cyrus Omidyar is a surgeon, who currently practices in Aliso Viejo, California.

His mother, Elane Mir-Djalali is an academic who earned her doctorate in linguistics at the Sorbonne. The family shifted to the US owing to his father’s job location, as he initially worked as an urologist at Johns Hopkins University in Baltimore.

He married Pamela Karr, who is also one of the co-founder of his philanthropic firm, Omidyar Network. He is also a benefactor to the US Democratic Party candidates and                               organizations. In 2010, he joined Bill Gates and Warren Buffet’s “giving pledge”. He publicly committed to give majority of his wealth for charitable causes.

Pierre completed his elementary studies from Punahou School in Honolulu and he currently serves on its Board of Trustees.

He took a great interest in computers while studying in ninth-grade at The Potomac School in McLean, Virginia. He graduated from St. Andrew’s Episcopal School, Maryland in 1984.

He completed his bachelor’s degree in Computer Science from Tufts University, Massachusetts in 1988. During his undergraduate years, he also studied at the University of California.

After completing his studies, Pierre went to work for Claris, a subsidiary of Apple Computer. He worked there on the team that upgraded MacDraw to MacDraw II. He co-founded a pen-based computing startup, Ink Development in 1991.

However, his startup was later re-branded as an e-commerce firm with the new name of eShop Incorporation. The company was acquired by Microsoft on 11 June, 1996 for less than $50 million and he earned $1 million from the deal.

Journalism ventures:—
Pierre has been involved in online journalism and since 2010, he is serving as the head of investigative reporting and                                    public affairs news service, Honolulu Civil Beat that covered civic affairs in Hawaii. The venture later partnered with HuffPost with the latest weblog regional addition, HuffPost Hawaii.

He declared in 2013 that he would create and finance a journalism venture called First Look Media. He launched it on 10 February, 2014 with The Intercept and some well-known journalists like, Glenn Greenwald, Laura Poitras, Jeremy Scahill, Dan Froomkin , Jay Rosen and John Temple.

He has also been a part of the executive producer team for the movies including, Merchants of Doubt (2014) and Spotlight (2015).

Pierre Omidyar- Founder of eBay:—
Pierre established his e-commerce company, eBay in 1995. The company is headquartered in San Jose, California. He served as the Chairman of the company from 1998 to 2015. He also served as the Board member of eBay till 2020. Omidyar was named under the billionaires after eBay launched a successful IPO in September 1998.

At age 28, he started coding for an online venture that would enable a direct person-to-person auction for collectible items. On 4 September, 1995, he launched the online service called Auction Web that eventually became the auction site eBay.

By 1996, he signed a licensed deal of selling airline tickets online. It hosted two million auctions within the first month. By 1997, he renamed the company from Auction Web to eBay and was strategic enough with effective advertising.

Reportedly, it has committed more than $992 million to nonprofit organizations and for-profit companies that stimulate economic advancement and revitalize individual participation across multiple investment areas.

Mr. and Mrs. Omidyar along with Richard Branson had established the Nduna Foundation (Founder- Amy Robbins), Enterprise Zimbabwe in 2010. He further established Luminate, a global philanthropic organization in 2018. After governing it for ten years, Omidyar separated the organization into a separate unit.

Pierre Omidyar- Honors & Awards:—
Received the Honorary doctorate from Tufts University in 2011
Bestowed with the EY Entrepreneur of The Year National Winner in 1999
Conferred with the Golden Plate Award of the American Academy of Achievement in 2000
He was named the 2018’s Third Most Influential French Entrepreneur by Richtopia