Graham Stephan is earning $6 million per year from ‘Youtube’! Here’s his story- 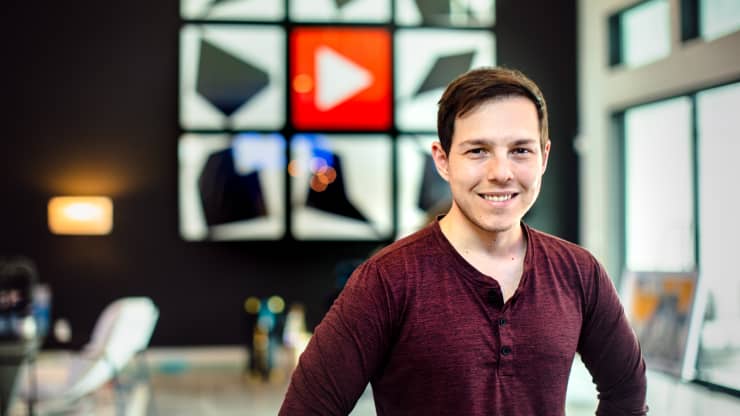 Walking into Graham Stephan’s Las Vegas home, the first thing you see is a massive 310-gallon aquarium in the entryway. Equipped with color-changing lights and filled with coral reefs and brightly colored fish, the YouTube star’s prized possession is impossible to miss.

He describes the $45,000 he’s spent on the aquarium, filtration system, and marine life as “purely an expense,” but has zero qualms about pouring his money into it.

“The level of enjoyment I get from the aquarium is just unparalleled to any other experience that I would be able to buy,” the 31-year-old says. “This for me is the tank I would have set up as a kid when I was 12 if I had whatever I wanted.”

Graham Stephan has spent $45,000 building out his dream aquarium.
The aquarium is emblematic of the seismic changes that have occurred in his life since he was first profiled for CNBC Make It’s Millennial Money series in November 2019. Back then, Stephan was still working in real estate part-time and filmed videos for his popular YouTube channel in his 700-square-foot Los Angeles duplex.

His brand now encompasses five YouTube channels and a podcast, and his workload has gotten so intense that he hired not one, but two employees — one of whom lives with him full-time. His duplex has been replaced by a $1.4 million, 3,900-square-foot home 20 minutes away from the Las Vegas strip that he shares with his girlfriend, Macy.

After breaking the $1 million annual income threshold in 2019 and making $5.1 million in 2020, Stephan is on pace to earn $6 million in 2021 after expenses, with $3 million coming from YouTube ad revenue and the rest coming from sponsorships and affiliates, as well as selling courses on the online platform Teachable.

He achieved this growth by quitting his real estate career to focus on YouTube full-time, spurred in part by early coronavirus lockdowns that kept him at home making videos. “That was the point for me where I was like: ‘I want to go all in on YouTube,’” he tells CNBC Make It.  Stephan’s life is now fully centered around content creation, and he’s finally allowing himself to enjoy his success.

He decided to move to Las Vegas after visiting a close friend who had just bought a house in the development where Stephan currently lives. His friend mentioned that the house being built next door was for sale, and Stephan decided to seize the opportunity. He closed on the property in summer 2020, and moved in last December.

The new home has been a major boon for Stephan’s professional life. While he once worked on videos in his garage, Stephan now has a dedicated office that includes an exact replica of his original set that still sits in Los Angeles. In order to keep complete continuity between his videos during the move, he even got another aviator wing desk and T-Rex skull.

The house also has a full office, bedroom for his live-in assistant and office for his other employee, as well as a professional podcast studio complete with soundproofed ceilings.   Stephan still pays mortgages and collects rent on his four Los Angeles properties, and decided to rent out his old apartment instead of selling it.

Pivoting to YouTube full-time:
Stephan decided to leave his job as a real estate agent at the Oppenheim Group for a couple of reasons. First, moving out of California required him to give up his real estate license. And more importantly, he had come to the realization that the time and effort he was putting into selling homes was better spent on his YouTube channel.

Stephan estimates that when his first Millennial Money episode was released, he was spending roughly 20% of his time on real estate and the other 80% on YouTube, often staying up until 2 a.m. to work on videos.

At the time of his pivot to becoming a full-time YouTuber in mid-2020, Stephan’s channel had roughly 1.5 million subscribers and he was on pace to earn $1 million from YouTube for the first time.  Now, his main channel has around 3.5 million subscribers. As of early July, Stephan had already earned $1.42 million in ad revenue from his various channels for 2021.

The growth isn’t due only to the increase in hours Stephan puts into YouTube, but also to a change in the type of content he makes. Though Stephan became popular by making videos talking about his investments and real estate earnings, he has pivoted to news analysis and explaining complex financial topics.

Stephan says reading the thousands of comments on his videos helped him identify a strong desire from viewers for someone who could explain what was going on in the markets.

This change also allowed Stephan to create content based around the news of the day, which in turn helps draw in subscribers who may not already be familiar with his brand. In recent months, he has covered topics ranging from the housing market to cryptocurrency to meme stocks. “It provides me with a lot more flexibility to be able to comment on financial-related news or whatever is going on and give my take on it, as well as some actionable steps that the viewer might be able to take from it,” Stephan says of his new strategy.

Growing the ‘Graham Stephan’ team:
For Stephan, a typical day begins at around 6:30 a.m. — right as the markets open on the east coast. On most days, he stays in his office until 6 or 7 p.m. “Ten hours a day is probably spent in front of a computer researching the markets, trying to plan out ideas, reading what people want to hear about,” Stephan says.

Until recently, Stephan took pride in his channel being a one-man show. But as he increased his YouTube-related workload during the pandemic, he realized he needed to make a change. “The tipping point for me was really when I started to see my own work decline, despite me putting in 12 to 15 hours a day,” he says. “That’s the point where it started making sense to bring someone else on.”

The tipping point for me [to hire someone] was really when I started to see my own work decline, despite me putting in 12 to 15 hours a day.
Graham Stephan.   His team now includes a live-in editor, as well as another editor who keeps an office in Stephan’s home. Together, the three run all of Stephan’s channels, as well as assist with his weekly podcast. Altogether, Stephan puts out nine new pieces of content each week. “The dynamic in person is so much different than if you’re doing it over a Zoom call or you’re doing it over the phone,” Stephan says of the decision to keep his team close. “We’re able to create so much more.”

Leaving behind (some of) his frugal ways:

Stephan is well aware of his reputation as a frugal millionaire despite his $15.5 million net worth, but he says that over the past few years he has learned that sometimes spending money can be more valuable than pinching pennies. Though he won’t be stopping by a Starbucks any time soon, there are a number of places where he is more willing to open his wallet.

“The biggest thing that I would say I started spending money on was being able to buy back my time,” he says. “This is a shift that probably happened for me about a year ago when I was overworked and taking on too much.”

He now spends $130 to have a technician come once a month to maintain his swimming pool and splits $250 a month evenly with his girlfriend to hire a cleaning person for the house. He says that the expense is worth it to have more time to relax or put back into his work.   Stephan still tracks all of the money that comes in and out of his accounts, but doesn’t keep a strict budget anymore because his default instinct is to always save or invest new income rather than spend it. He estimates that he saves about $400,000 per month on average, with 60% of that going into his investments and the rest going into high-interest savings accounts.

He budgets about $800 per month for food, including taking the team out for sushi when they have a particularly well-performing video. Stephan’s girlfriend pays for the couple’s roughly $300 monthly grocery bill. He was able to cancel his $220 Equinox gym membership when he moved to Las Vegas because his living community has a full gym.

When it comes to furnishing his home, Stephan didn’t cut any corners. He says he spent about $100,000 on furniture and artwork, including a massive neon sign with his “Smash The Like Button” slogan, as well as an $80,000 piano that he bought used for $16,000.

Looking ahead:
Stephan is busier and more successful than ever, but he’s acutely aware that his career has taken him into uncharted waters.“We’ve never really known a history of what it’s like for financial creators on YouTube. Even five, six years ago, there were no such things as people making videos about finance … to the level it is now,” he says.