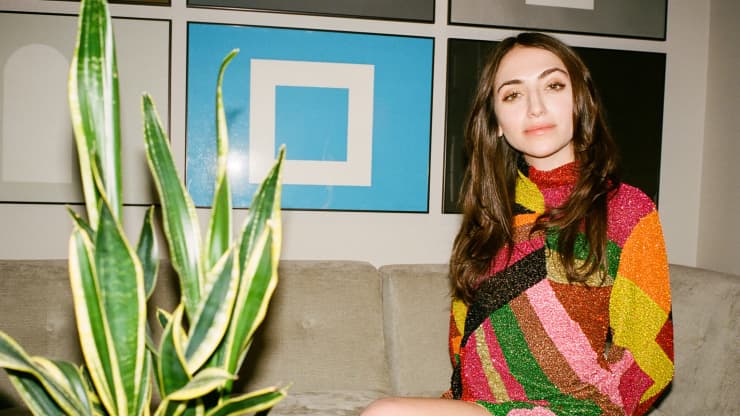 Two years ago, while many of her peers at Columbia University were busy picking majors, cramming for finals, and running to part-time jobs, Cami Téllez was quietly building a multi-million dollar company.

Téllez founded Parade; a direct-to-consumer intimates brand, while she was an undergraduate at Columbia alongside her business partner Jack DeFuria, who was also an undergraduate student at the time, with $3.5 million in seed funding. She stdied English and art history for seven semesters before dropping out in January 2020 to be Parade’s full-time CEO and creative director.

That risk paid off: Parade has sold over two million pairs of underwear since its launch and is currently valued at $140 million, with funding from investors like Neil Blumenthal, Shakira, and Karlie Kloss. Parade has found success by representing what the traditional underwear market isn’t.

Instead of enforcing a popular standard of sexiness that relies on supermodels and expensive lingerie, Parade has focused on creating comfortable, affordable undergarments that celebrate all body types. Parade’s underwear collection ranges from $8-$15 and comes in sizes XS-3XL, and they recently introduced a line of bralettes.

Téllez, 24, grew up in Princeton, New Jersey, and Berkeley, California, with her parents, who fled their home in Barranquilla, Colombia, in 1994 amid civil unrest. She tells CNBC Make that her parents’ determination has empowered her to lead a fast-growing startup.

“I see them as visionaries pursuing the American dream and making a better life for themselves,” she says. “Their incredible grit instilled in me a real sense of mission and purpose that has been essential for me in leading Parade.”

The decision to drop out of school was especially difficult for Téllez, as her parents saw an Ivy League degree as the ultimate symbol of success in America. “I’m sure other Latinx entrepreneurs understand how challenging it is to pursue entrepreneurship in a culture that values following an institutional career path,” she says.

But watching her run a successful business has brought them even more joy, and   Téllez says they’re some of her biggest supporters. “My father once told me, ‘America is one of the only places in the world where you can fail, and it’s not career-defining,’” she shares. “That opened my aperture, allowed me to swing for the fences and dream bigger as I continued to build Parade.”

Much of Parade’s inspiration came during trips to the mall when Téllez was a teenager, where mostly white models advertised hot pink thongs and nude briefs alongside each other. “I felt very out of touch with the vision Victoria’s Secret and other stores had of femininity,” she says. “I always thought women deserved brands that were just as bold and expressive as they were.”

At first, Téllez says investors didn’t understand the need for a new underwear brand focused on a younger consumer. “But the strongest part of my pitch was that I was, and still am, the customer,” she says. “That allows me to predict the future of the category and stay abreast of rapidly changing consumer preferences.” With Parade, Téllez hopes to “rewrite the American underwear story” and become a leading challenger to Victoria’s Secret, Calvin Klein, and other big players in the lingerie market.

Instead of dictating what’s cool, Parade has taken a “bottom-up” marketing approach by tapping influencers on Instagram to showcase how Parade’s underwear fits within their styles. The company’s ad campaigns, which feature young people modeling the brightly hued styles, have attracted a dedicated following online.

Parade has 5,000 brand ambassadors   who promote Parade’s designs on their social media feeds and give feedback, some in exchange for compensation or gifted product. Téllez also estimates that “tens of thousands” of customers have posted about Parade online. Though Téllez’s passion to build an inclusive underwear brand is “fundamentally shaped” by her identity as a first-generation American, she notes that being a young entrepreneur from a minority background is a “double-edged sword.”

“It’s difficult for investors to match you against the rest of their portfolio,” she says. “But I think investors also realize that they need to continue to innovate their perspective on what kind of people are going to help build the future of different categories.”

2021 has already been an eventful year for Parade. Last month the company raised $20 million in Series B funding led by Stripes, a growth equity firm that also invests in clothing brand Reformation and plant-based milk company Califia Farms. The funding comes as Parade prepares to open its first brick-and-mortar store in November in New York as well.

In moments like these Téllez reflects on the early days of Parade when they had just five employees packing boxes out of a 900-square-foot apartment in New York. “Before every launch, our entire office would hand-pack over 500 boxes to our community, write notes in every single one, and drive them to the post office,” she says. ″It took every single one of us and  we would work until it was done and no one would complain because they understood that it was for the people who cared about Parade the most: our community.”

Parade has even created a company value around box-packing to honor the “all hands on deck” mindset that got them to this point. “I love to hire people that understand that we’re not above anything, and we love getting in the trenches to serve the mission.”

Téllez is hopeful to see more young and Latinx entrepreneurs break into the field and make the startup world a more “just, equitable playing field.” Her one piece of advice for aspiring CEOs? “As you continue to take risks, challenge norms and    re-invent the status quo, remember there’s no time for being self-conscious about what it is that you’re putting out into the world,” she notes. “We all have one life, there are no dress rehearsals here.”