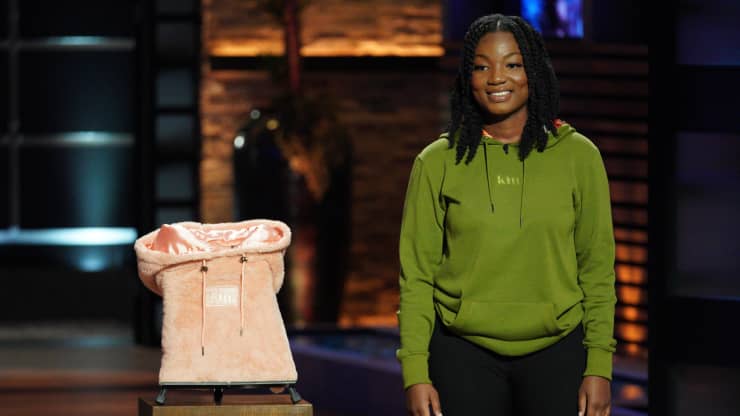 Philomina Kane started Kin Apparel in 2020 with just $500. This year, the company generated $355,000 in sales. As Philomena Kane tells it, stress was making her hair fall out.  Eight years ago, Kane was an undergrad at Princeton University majoring in biology — and the pressure was getting to her.

So she cut off all her hair, and as her natural hair regrew, her head needed additional comfort and protection. “I found myself always putting a scarf on before putting a hoodie on,” Kane said on Friday’s episode of “Shark Tank” on ABC. “One day, I was like, you know what, I’m going to make satin-lined hoodies.”

Last year, the 26-year-old from the Bronx, New York, started Kin Apparel with just $500. Kane said her start-up has already generated $355,000 in sales this year. And on Friday, Kane landed an additional $200,000 from    Shark Lori Grenier and guest Shark Emma Grede in exchange for 30% of her company’s equity.

Kin Apparel, which stands for “keep it natural,” specializes in sweatshirts with satin-lined hoods designed to prevent frizz, retain moisture and fit a variety of hairstyles. The company also makes pillowcases, beanies, bucket hats, and bonnets with the same satin lining. “Consider the girls with big beautiful curls who can’t find a hood big enough to fit her hair, or the guy with [dreadlocks] trying to stop lint balls from forming on his hair,” Kane said.

Grede, the founder and CEO of denim brand Good American and a founding partner of Kim Kardashian’s shapewear-apparel line SKIMS, said she was primarily drawn to Kane’s story and identity. “Retailers are looking for  Black female founders,” she said, adding that Kin Apparel’s broad, diverse audience “has a huge window of opportunity.”

That audience has coalesced mainly on social media. Kane has nearly 200,000 subscribers on her personal YouTube channel, where she documents her hair journey and gives tips to “help Black women embrace their natural hair,” she said.

The channel’s popularity and similar followings on Instagram and TikTok have allowed Kane to spend nothing on customer acquisition so far — a fact that impressed the Sharks. But popularity is a double-edged sword, Kane noted:  Due to “constantly going viral,” she struggled to keep up with demand. At the time of taping, Kane said she had about $500 in inventory and $150,000 in the bank. She asked the Sharks for $200,000 in exchange for 10% equity, so she could “buy more and stop being on pre-orders.”

When Grede and Grenier countered with 30% equity, Kane tried to negotiate them down — but the Sharks didn’t budge.   “You’re giving away something, absolutely,” Grede said. “Think about what you get in return.”

The deal is a redemption for Kane, whose grandmother was raised in Ghana: Her parents didn’t always approve of her abrupt career shift, she said. Before Kin Apparel, Kane planned to attend Columbia University’s Mailman School of Public Health and find a job in global health.    “I got a lot of flak for it from my family,” she said.

Shark Mark Cuban, who passed on the deal, recommended that Kane works with an investor who can complement her inventiveness and creativity with practical business advice.     “Recognize one of the greatest skills an entrepreneur can have is knowing what they can’t do,” he said.