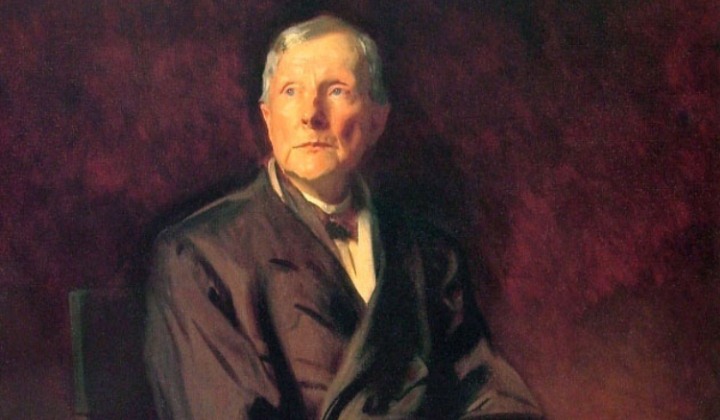 John Davison Rockefeller Sr. was an American oil industry business magnate, industrialist, and philanthropist. He is widely considered the wealthiest American of all time and the richest person in modern history.

Lesson 1: Save Compulsively and Invest

Over three years, Rockefeller saved up a year’s salary as a clerk and launched his first venture at the age of 19, buying and selling produce. Known for his thoroughness, Rockefeller had the unlikely combination of being a risk-taker and taking out a $20,000 (2010 dollars) loan from his father to start the venture.

He was incredibly conservative with his earnings, marking personal expenses down in an accounting ledger. Eventually, his savings from the produce venture allowed him to transition into the oil refinery business, which paved the way for his future financial success and fame.

Lesson 2: Be Clear About Your Goals

Rockefeller always set goals for himself and set upon achieving them. The reason he set goals was to drive himself further forward, to achieve what was initially thought to be impossible. His dreams were clear, concise, and well thought out.

John D. Rockefeller had just a single petrochemical refinery in Cleveland. There were hundreds of other businessmen in America in those days with oil refineries of their own. Oil was a highly fragmented business.

Rockefeller knew that the only way to succeed in the business was to monopolize oil refining and have all the refineries in the country centrally controlled by a single authority – himself. Yes, it was an impossible task, but he set himself to it and was utterly successful within a decade.

The man borrowed. He often borrowed as a means to grow his business faster. It’s always a risk to borrow, and I’ve never been highly comfortable doing it, but the logic is sound, so long as you’re good at paying off your debts – which Rockefeller was extremely good at.

The hardest problem throughout my business career was obtaining enough capital to do all the business I wanted to do and could do, given the necessary amount of money. ~ Rockefeller

One of the most taken-for-granted things in this world today is time. Most of us never get anything done because we tell ourselves we can start on Monday or there will be plenty more time down the road.

Each of us has the same amount of time, twenty-four hours a day. What sets apart those who succeed from those who do not is how each individual uses this powerful thing called time.

Be smart about the people with whom you go into business. Friendships are destroyed daily because of business decisions, and many bad decisions are made to preserve interpersonal relationships. Before going into business with friends or family, you should ask yourself whether or not it is worth it to move forward at the risk of the relationship.