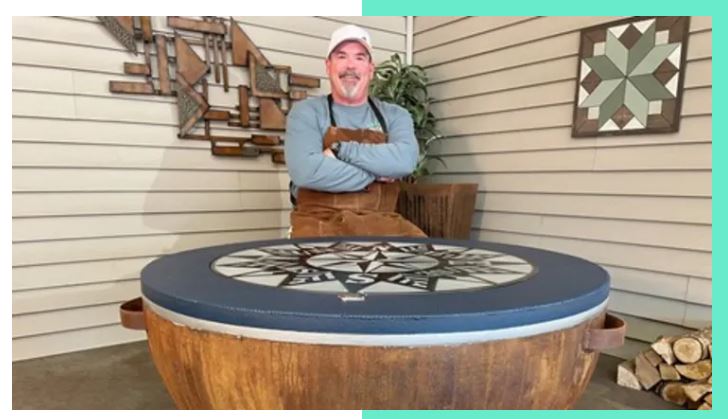 Tim Riegel, 59, started making fire pits out of propane gas tank ends a year ago. He makes up to $16,000 per month from his side hustle. With inflation on the rise, Tim Riegel wanted a side project for extra income — so in September 2021, he bought seven $90 propane tank ends off Facebook Marketplace.

The 59-year-old intended to repurpose the tank ends as fire pits — a freestanding, open metal container for fires, typically for backyards or patios — and sell them for $400 each in his hometown of Lamar, Missouri. The fire pits proved popular: They sold out in just ten days, and Riegel was inundated with requests for more.

In March, he moved the side hustle online, opening an Esty store. He brought in $50,000 over the next five months, according to documents reviewed by CNBC Make It. In June, his highest-earning month to date, he made $16,000 selling fire pits, most of which are priced between $600 and $1,700.

“It’s tough for everybody right now, and I thought, ‘I can make some extra income and have fun doing it,’” Riegel tells CNBC Make It. “The fun is the magic of the whole deal. I pretty much saturated my hometown in September through December with fire pits.” Here’s how Riegel started his unlikely business and his plans to make it more financially sustainable:

A welder and perfectionist by training
Riegel oversees domestic suppliers for a furniture company during the day and says his full-time gig taught him the art of navigating e-commerce platforms. He’d previously used Etsy to source new designers and inspiration. “At first, I thought [Etsy] was just a bunch of old women sewing quilts,” he says. “Then I realized I could use it to see what’s out there, who’s being creative. The [small] companies that are just about to break [into industries] usually start on one of these platforms.”

Riegel is also a welder — he used to restore cars as a side hustle and took vocational welding classes in 2006 — and says working creatively is cathartic, even if his side hustle adds 40 extra hours of work to his schedule each week.

The idea came from a friend who made a similar fire pit from a propane tank end. He says it took trial and error to perfect the bronzed and customized versions Riegel now sells. He wanted his fire pits to last longer than the ones sold in big retailers, which he says are “flimsy” and “meant to last maybe two years.”

So, he bought some scrap metal from a nearby seller and started experimenting with different legs and feet for the fire pits. “The first couple was pretty bad, but the good thing about metal is you can just cut it off and redo it,” he says.

A high cost for heavy-weight freighting
Riegel says he spends about seven hours per month just sourcing the metal, which is becoming increasingly expensive. He says that his profit margins are typically around 35% to 40%, but he only keeps about half of his proceeds, reinvesting the rest back into his side hustle.

Currently, Riegel only has one employee: He pays his 79-year-old father, Terry, $15 per hour to help recycle the tank ends and coordinate freight schedules. The 250-pound fire pits can’t be quickly shipped through FedEx or UPS, and Riegel’s father helps maintain constant contact with the trucking companies that carry the products throughout the U.S. and Canada.

The size of the products limits Riegel’s ability to ship them out: From March through July; he only got 60 fire pits onto the road. The further away a customer is, the more expensive shipping is — Riegel estimates an average shipping cost of $375 per order — so he only sends out a couple of fire pits on freight trucks at a time.

He says Etsy’s shipping partners are costly for small-business owners who sling a low production volume. So, he leans on other sellers, who tell him which carriers are most effective for small businesses like his. He says he works with several private pages to meet his shipping needs, primarily Estes and Unishippers.

However, he says that Etsy does substantially help Riegel with advertising and search engine optimization. He pays about $200 extra monthly to advertise through Etsy — which he says is less than comparable rates on Wayfair and Amazon Seller Central. He also doesn’t mind reinvesting so much of his profits into the side hustle; he says — at least for now. Currently, that money is going toward figuring out how to add gas lines, shrink production times, and experiment with new products like chimineas and a freestanding fireplace.

As for the money Riegel has kept, he’s spent some of it on another important endeavor: his daughters’ weddings. “Having [extra money] helps,” he says. “But more than anything, it’s just seeing what I can do with this business and drive it forward.”