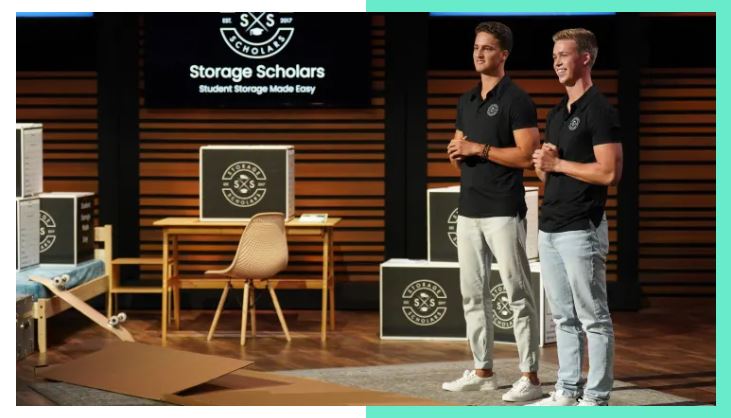 Sam Chason and Matt Gronberg, the founders of Storage Scholars, appeared on ABC’s “Shark Tank”, seeking a $250,000 investment for a 5% stake in their company.

Mark Cuban paid his way through college with a variety of side hustles. On Friday’s episode of ABC’s “Shark Tank,” a pair of founders who started a company from their dorm room that helps college kids make extra cash struck a nerve with Cuban — prompting the billionaire investor to offer them a $250,000 investment deal.

Sam Chason and Matt Gronberg are two former Wake Forest University classmates who founded their business, Storage Scholars, in 2017. It started as a way to make extra cash to pay down their college debts: They charged their classmates to pack up their belongings and store them between school years.

Storage Scholars is a full-fledged business that operates at 48 schools across the U.S. It had already pulled in $1.86 million in 2022 revenue by the time they taped their “Shark Tank” episode. All the Storage Scholars workers who pack and move the boxes are college students themselves, meaning the company is “creating high-paying jobs on campus,” Chason said.

“As two 18-year-olds terrified at the thought of student debt, we built Storage Scholars in college, which allowed each of us to graduate debt-free,” Gronberg told the Sharks before asking: “Who’s ready to join us on our mission to empower students across America to do the same?”

Chason, 24, and Gronberg, 23, asked for a $250,000 investment in exchange for a 5% stake in the company. Their pitch generated interest from multiple Sharks, but Chason and Gronberg seemed most interested in partnering with Cuban.

“I know that college debt is a big thing to you; you’ve been very outspoken about it,” Gronberg told Cuban. Indeed, Cuban has argued in favour of plans to lower student debt, including President Biden’s recent partial loan forgiveness plan, as a way of both helping young borrowers and boosting the U.S. economy.

Chason said he entered college concerned about dealing with potential six-figure debt at Wake Forest, where tuition and housing cost more than $70,000 yearly. Early on, the duo went door-to-door in the Wake Forest dorms looking for customers. Chason added that the business brought in just $18,000 in revenue in its first year, a bare fraction of its current figure.

Today, the cost of Storage Scholars’ packing, moving, and storage service runs about $559 per student, on average, the founders said. That includes delivering empty boxes, tape and other packing supplies, pick up, summer storage and delivery of the packages to students’ new dorm rooms for the following school year.

All those services, including labour, cost Storage Scholars around $199 per move. After passing on offers from Kevin O’Leary and Daymond John, each of whom was willing to invest $250,000 for 20% stakes in the company, Chason and Gronberg mulled Robert Herjavec’s offer of $500,000 for a 20% stake before listening to Cuban pitch.

The Dallas Mavericks owner countered with a $250,000 offer for a 12% stake, which the Storage Scholars founders negotiated down to a 10% stake. That meant Cuban offered the same $2.5 million valuation as Herjavec but with half of the investment capital.

Cuban argued that he could give the Storage Scholars founders “something you can’t get elsewhere.” “I’ve got a platform. There are schools that I have connections to, and if I get out there starting to talk about it…the phone’s going to ring for you to open up new schools,” Cuban said. “That’s the value that I can bring.”

Ultimately, Chason and Gronberg agreed with Cuban’s argument that “it’s not just about the money,” and they sided with the Shark, who they felt best supported their company’s mission of building a successful business that can also help its workers chip away at their college debt. “We’re just over the moon,” Chason said of their deal with Cuban.