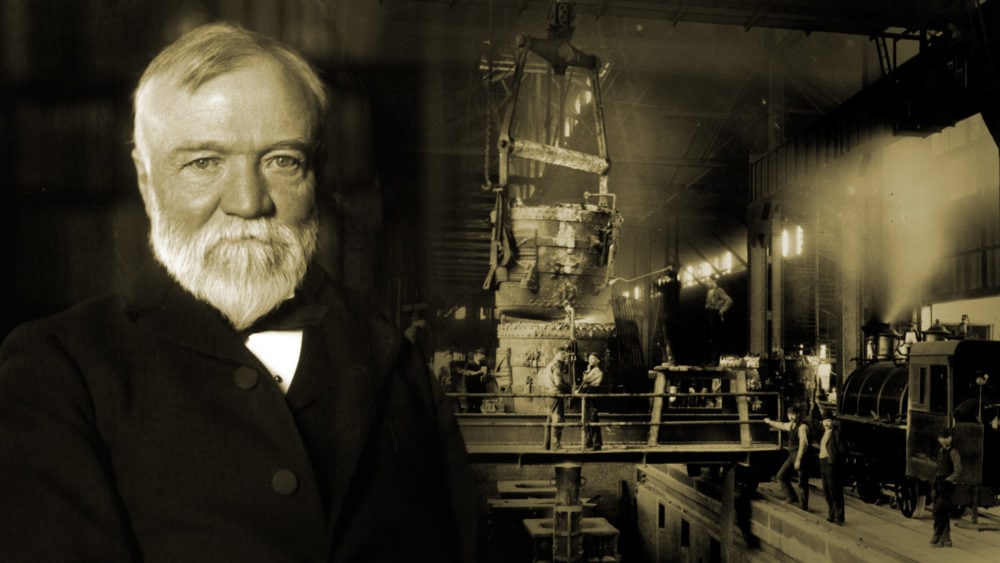 Andrew Carnegie was a Scottish-American industrialist and philanthropist. Carnegie led the expansion of the American steel industry in the late 19th century and became one of the richest Americans in history. He became a leading philanthropist in the United States and the British Empire.

Industrialist and philanthropist Andrew Carnegie was born on November 25, 1835, in Dunfermline, Fife, Scotland. At the age of 13, in 1848, Carnegie emigrated to the United States with his family. They settled in Allegheny, Pennsylvania, and Carnegie went to work in a factory, earning $1.20 a week. Andrew Carnegie was a self-made man, and his life depicts a true “rags to riches” one.

Lesson 2: Have to focus.
Concentrate your energy, thought, and capital exclusively upon the business in which you are engaged. Having begun in one line, resolve to fight it out on that line, to lead in it; adopt every improvement, have the best machinery, and know the most about it. “The men who have succeeded are men who have chosen one line and stuck to it”.

Carnegie did not make his millions by spreading his risk. He focused on one job, one company, and one industry at a time to be able to fully concentrate all his resources and energy on the task at hand. Regardless of circumstances, Carnegie believed that with the right amount of dedication and a single-minded view, success at any task could be achieved.

Lesson 3: Go the extra mile
The habit of Going The Extra Mile gives one the benefit of the law of Increasing Returns. Increasing returns mean lower costs per unit just as diminishing returns mean higher costs. Thus, the law f of increasing return signifies that the cost per unit of the marginal or additional output falls with the expansion of an industry. As more and more units of the commodity are produced, the cost per unit goes on steadily falling.

It is the greatest of all the known methods by which the man who works for wages may promote himself to higher positions and better wages, and serves as a practical means by which a man may attain the position of ownership of a business or industry.

Lesson 4: Take an interest in others
It is through Carnegie’s business friendships that he was able to make his initial investments and able to build his enterprises. The ability to know a lot of people and identify what they are good at is extremely helpful when an opportunity comes along. As Carnegie says, it’s very difficult to succeed on your own.

“I believe the best preventive of quarrels to be recognition of, and sincere interest in, the men, satisfying them that you care for them and that you rejoice in their success.” – Andrew Carnegie. In addition to leveraging business friendships to promote partnerships, Carnegie was also very deliberate in his relationships with his employees. Many of the strikes that occurred were placated through sessions of listening to and understanding worker complaints.

Lesson 5: Motivate yourself. It’s your choice
The only person who is always with you is you. So you have to choose to place the most important motivation on yourself and then add help and inspiration from blogs, books, friends, and family when you can or feel the need. “People who are unable to motivate themselves must be content with mediocrity, no matter how impressive their other talents.”Andrew Carnegie