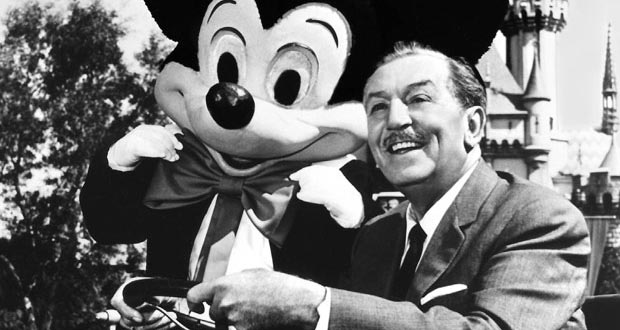 Walter Elias “Walt” Disney was born on December 5, 1901, in Hermosa, Illinois. He and his brother Roy co-founded Walt Disney Productions, which became one of the best-known motion-picture production companies in the world. Disney was an innovative animator and created the cartoon character Mickey Mouse.

Walt Disney had humble beginnings; he was not born a success, instead, he made his success. There are some invaluable lessons every entrepreneur can learn from what he was able to accomplish in his life. Below are 5 things that you can learn from one of the most successful entrepreneurs in history.

Lesson 1: Take What You Do Seriously
Whenever Walt Disney made his cartoons he always did so with the focus of a lion stalking his prey. He always paid attention to every detail and dealt with things with the utmost care. He never took his art and talent for granted.

Never would you find Walt Disney in his studio just slacking off and procrastinating on his projects; he always took the lead when it came to doing what he loves and he would never put his passion on the back burner.

Lesson 2: Don’t be afraid to take risks
Apart from being a pioneer in animation, Walt Disney was quite savvy in terms of branding and marketing. Snow White and the Seven Dwarfs was the first film ever to already have a complete merchandising campaign in place when the movie was released.

The film went on to earn $1.5 million, and this happened during the Great Depression. Because of Disney’s risks, the company has only exponentially expanded from there. “It’s kind of fun to do the impossible.” – Walt Disney

Lesson 3: Embrace new technology
The 1920s and ’30s were a much more low-tech age, but they were also a time of innovations: New inventions like Technicolor and sound were seen as daring risks for filmmakers. Actors, directors, and even some audiences vehemently disliked talking pictures. However, as Wesley Stout of the Saturday Evening Post predicted, people eventually adapted their ears — and their eyes — and Disney cashed in.

He also created the first full-length animated movie (“Snow White and the Seven Dwarfs”), and, according to Entrepreneur, was the first Hollywood studio head to get on board with television, which turned out to be quite lucrative, as the famous “Mickey Mouse Club” enthralled kids everywhere while providing advertising for the Disney brand.

Lesson 4: Have the courage to pursue your dreams
If you can dream it, you can do it. ” Walt Disney.  Dreams don’t turn out to be a reality on their own. You need to nurture them and ensure you provide them the attention they deserve. You need to have confidence in what you want and the courage to take action toward your dreams.

No one stated that living your dreams was easy. If it was, then more human beings would do it. “All our dreams can come true if we dare to pursue them.” Walt Disney. Don’t simply dream without doing something about it. That doesn’t help anyone, least of all you.

Lesson 5: Never give up
Many human beings don’t know that Walt Disney was not an overnight success. He started numerous businesses that went bankrupt. He started a commercial art studio, and it tanked. He attempted to create advertisements, and they also failed due to a lack of revenue. Instead of giving in or giving up, Walt always just attempted the next thing.

All the adversity I’ve had in my life, all my troubles and obstacles, have strengthened me. You may not recognize it when it happens, however, a kick in the teeth may be the best thing in the world for you.” Walt Disney