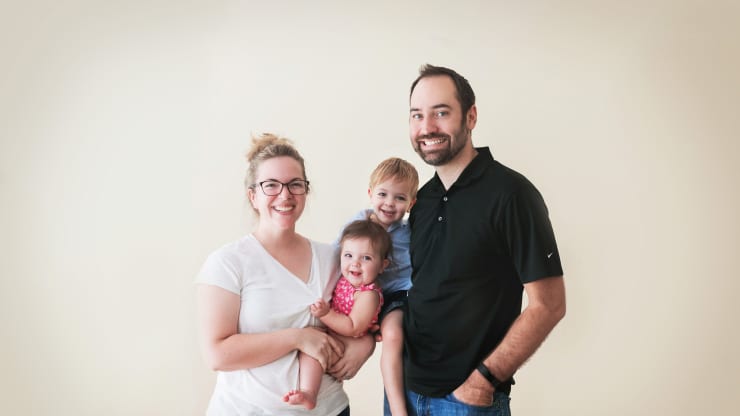 In 2008, Deacon and Kim Hayes, now 38 and 40, respectively, had just gotten married. Attempting to get a handle on their finances, the two realized they were “drowning in debt,” says Deacon. They owed $52,000 in student, car, and credit card debt.

The two resolved to pay it off as soon as possible, with Deacon setting a goal for them to do so within 18 months. Kim was skeptical, but by adopting multiple new savings habits and picking up some side gig work in that final six-month stretch, they could do it. They now live with their two kids in Scottsdale, Arizona. Here are three of Deacon’s top tips for cutting back on spending and putting more money toward paying down debt.

Try a budgeting app like Mint or one that has a free version like PocketGuard to track your spending, or use an Excel or Google spreadsheet. Keeping track of your spending makes it much easier to see where your pitfalls are and how you could start changing your behavior.

Gathering data makes it easier to see if there are immediate moves you can take to tackle your debt. “I created this form; I called it the financial game plan form because I wanted everything on one piece of paper,” says Deacon. When he did, he noticed he had an upside-down car or one where the loan was more than the car’s worth.

Once you’ve got a sense of how much you spend on regular expenses like groceries and going out, set specific amounts that you’re allowed to spend on them every month and make sure not to exceed them. The Hayeses did this with a cash envelope system: They put the dedicated amount for each expense  in an envelope every month to make sure they never exceeded the limit. Groceries were $250, entertainment was $100, and so on.

The two stayed on track by “having weekly budget meetings,” he says. “We’d just check in and make sure we’re on track.” Set calendar reminders once a week or once a month to see how much of your budgeted sums you’ve spent and plan how you’ll use the rest to keep up with your goals.

Ask service providers if they ‘have any better packages’
Another savings tip Deacon offers is to take inventory of all of the bills you’re paying and call up the service providers to see how you can cut the costs. “Car insurance, cellphone bill, internet, anything like that,” he says. Call up customer service representatives and say, ‘“Hey, I’ve been with you for a while, you guys have any deals going on? Do you have any better packages than what I have?’”

“All of a sudden you’re saving $200-$300 a month just for making a few phone calls,” he says. Deacon looked into how he and his wife could consolidate their services. Instead of each being on a different cellphone provider, one party would join the other’s service and  end up saving on their plan. When looking at each bill, “My line was, ‘How can I make this number smaller?’” says Deacon. “On the whole, it was probably somewhere around $600-$800 a month that we were saving that we could put towards our debt,” he says.