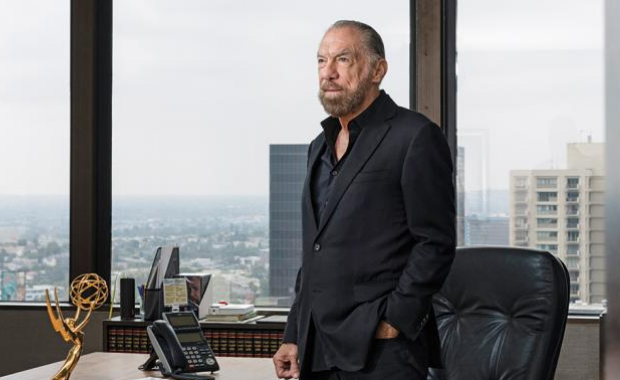 Challenging life experiences have helped to form some of the most influential and successful people the world has ever seen. John Paul DeJoria is no exception – the self-made, billionaire entrepreneur is best known as the co-founder of world-renowned hair care business John Paul Mitchell Systems and, later, the Patrón Spirits Company.

Who is John Paul DeJoria?
Born in 1944, DeJoria’s parents divorced when he was barely two years old. From the age of nine, DeJoria sold door-to-door Christmas cards and newspapers to keep the family afloat. Once his mother’s financial realities were too much to bear, DeJoria and his brother were sent into foster care.

This was his first lesson in tackling challenges head-on; this only way is up attitude served him incredibly well when he started John Paul Mitchell while living out of his car with only $700 to get the company up and running.

Rather than let these adversities deter him, DeJoria saw these economic obstacles as an opportunity to work hard. When there was no food on the table, he sold Christmas cards. When there were no funds available for college, he sold encyclopedias. He couldn’t rely on anyone else, saying, “if you expect free lunch to come your way, you’re not going to get very far, and you’ll be very bored. Go out there and do something. Get involved.”

Those were all crucial lessons learned even before starting his business with hairdresser Paul Mitchell. DeJoria, through employment at Redken and Fermodyl Hair Care, had learned about the hair care business and was eventually fired from both positions, further strengthening his determination to succeed.

From there, the hair care products were shipped to numerous salons, and it became a million-dollar company after just two years of operation. The sheer tenacity to succeed after the initial setback helped turn seed money of just $700 into a billion-dollar business.

How often do we hear stories of homeless people living out of their cars, changing their circumstances, and ending up as billionaires? But John Paul DeJoria has done just that, and the 76-year-old now has a net worth of $3.1 billion, according to Forbes.

Lesson #1: Familiarize Yourself with Rejection:—
One of the biggest inspirations for DeJoria during his early career was his capability to overcome rejection. He’d later say, “You’ve got to be prepared in life for a lot of rejections,” pointing to his time as a door-to-door encyclopedia salesman as a prime example of the many doors that will be closed in your face in life.

As a consequence, he began to expect negative responses, which came to benefit him throughout his career: “You must be just as enthusiastic on door 51 as you were on door 50, even if all 50 of those doors are closed in your face for a lot of rejection, you shouldn’t let it get you down,”

Lesson #2: Don’t Let the Past Hold You Back:—
Letting your mistakes, background, and adversities bog you down will only ever limit your future capabilities. As for DeJoria, he prefers to look on the brighter side, “When you’re down, most people think about the past and what got them there. That’s not going to get you anywhere. Think about what your next step is. Don’t dwell in the past—go forward,” he said.

Lesson #3: There Will Never Be a “Right Time”
DeJoria started John Paul Mitchell Systems in 1980 in one of the worst possible economic environments to start a business. Inflation was at its highest, and motorists were waiting in lines for blocks to get to the gas station before the supply ran out. DeJoria was completely homeless in his car when his first backer pulled out.

However, DeJoria and his business partner decided to press on and started their business with only a borrowed $700 and an answering machine. JPMS even settled on its iconic black-and-white logo because it couldn’t afford color printing. This shows that there is never a perfect time to start a business; it’s simply a case of making the best of what you have.

Lesson #4: Make Your Products and Services the Best They Can Be
“Always remember you don’t want to be in the product business. You want to be in the reorder business,” said an adamant DeJoria. He explains that once you’ve worked hard at developing a top-class product or service that people want, you have a far better chance of retaining that customer over the long term by seeing them as a partner to build a relationship with rather than a one-off customer.

Lesson#5: Doing Good Benefits You and Your Business

“If a business wants to stay in business, it cannot just think of today’s bottom line,” says DeJoria, “by helping others, you are creating future customers and inspiring employee loyalty,” he explains.

Customers love to be involved with those that donate their time to inspiring others, helping the planet, and making a difference in their community. Any good company must commit to helping others to succeed. Since he started his first business in 1980, DeJoria explains that employee turnover has been less than 100, and two were retirements.

Lesson #6: Hard Work Still Pays Off As It Always Has
DeJoria has noted in past interviews that the millennial generation is facing several issues that have created an increasingly resentful attitude amongst the current working age, such as rising student debt, dwindling economic prospects, and difficulty in making decisions.

DeJoria has a message for all millennials: “You can get through the hard times as long as you’re willing to work and put forth an effort and not sit back waiting on everyone else. America works, but to make it work, you’ve got to go out there, and you’ve got to do something.”