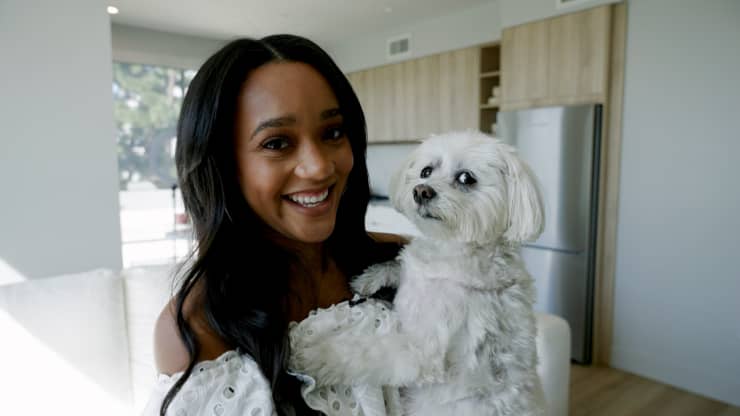 Lauren Simmons introduces herself to new people, she usually says she works in finance.  But really, the 27-year-old is an author, producer, podcast and TV host, angel investor and board member of several financial companies.

It’s a lot for one person, but Simmons is used to taking control of her career. She’s already made history several times over: In 2017, at the age of 22, Simmons became the youngest full-time female trader on Wall Street and the second African American woman trader in the New York Stock Exchange’s 229-year history.

But while at the NYSE, Simmons learned she was being paid just $12,000 while male colleagues with the same job and qualifications were making upwards of $120,000. From that point on, she committed herself that she’d never make less than $120,000 a year.

Simmons left the trading floor in 2018 and formed an LLC to manage all of her projects.  In the last few years, she has secured deals on a book, movie, TV show, and two podcasts. Her most consistent income comes from speaking engagements (she averages two per month), and she can earn up to six figures on brand deals.

No two days look the same. Simmons works long hours and on weekends, taking meetings as early as 3 a.m. and as late as 11 p.m. because she works with people all over the world. Her most recent project is a hosting job with the streaming series “Going Public,” which requires filming the series itself and traveling to promote it. In 2021, Simmons moved to L. And earned $650,000. In 2022, she’s on track to earn $1 million.

Simmons grew up in Marietta, Georgia, with her mom, twin brother, and younger sister. She credits her mom’s strict budgeting for how she learned to save 85% of her income, which she began doing while earning just $12,000 in New York City. It was barely enough to pay for transportation                        while she lived with the family in nearby New Jersey, and she didn’t spend any money on going out.

In 2017, at the age of 22, Lauren Simmons became the youngest full-time female trader on Wall Street and the second African American woman trader in the New York Stock Exchange’s history.

Simmons admits her saving strategy today isn’t the most traditional, but it works for her. She sends all of her earnings into a savings account and for the most part, doesn’t touch it. She also waits as long as possible to deposit her earnings. Simmons closed a few speaking engagement deals in January but will have her business manager hold onto the checks until just before they expire, so she won’t see that income until March.

“I like for my money to be out of sight, out of mind so I won’t spend it,” she says. She’ll sometimes transfer money to a separate checking account, which she keeps at $2,000 for everyday spending. She’ll give herself a little more for birthdays and holidays but never allows herself to spend more than 15% of her earnings each month.

Despite making a name for herself in the financial world, Simmons doesn’t feel like an expert all the time. She only began investing in the stock market during the 2020 pandemic downturn. She keeps her emergency fund, savings, and retirement money all in one bank account. And she unapologetically splurges on Bath & Body Works candles: “Any time they have a sale, I am there.”

As for managing her own money, “I think that there are days that I’m decent at it,” Simmons says, but “I know that there’s a lot to learn every time I get to a different phase in my life.”

This year, Simmons expects to earn $1 million across brand deals, partnerships, speaking engagements, and returns on investing in companies. But even for someone who loves talking about money, it still feels awkward to say out loud.    Simmons knows all too well that when young women succeed at work, “we don’t get the same kudos   as our male counterparts.” But those reminders only make her want to talk about her accomplishments and pay even more.

“That’s why we’re trying to fight societal norms and have these open dialogs and change the mindset of people,” she says. She wants to eliminate the stereotype that “young, successful women who make a lot of money are bragging.” The million-dollar milestone carries a lot of personal significance, too: “I’m the first person in my family to graduate with a college degree,” she says. “My family and I have come a long way, and I’m super grateful.”

Simmons couldn’t have predicted how much her life would change from the first day she walked onto the NYSE trading floor. But she still has big plans ahead to negotiate new projects for herself and invest in more startups.

Given the turns in her career thus far, it’s hard for her to say what she expects her life will look like in the next five to 10 years. But she hopes to have an investment property in Florida and maybe a house of her own somewhere else. “Outside of that, I have no idea, but I’m excited to watch this video five to 10 years from now and to see where I’m at — maybe running for president.”