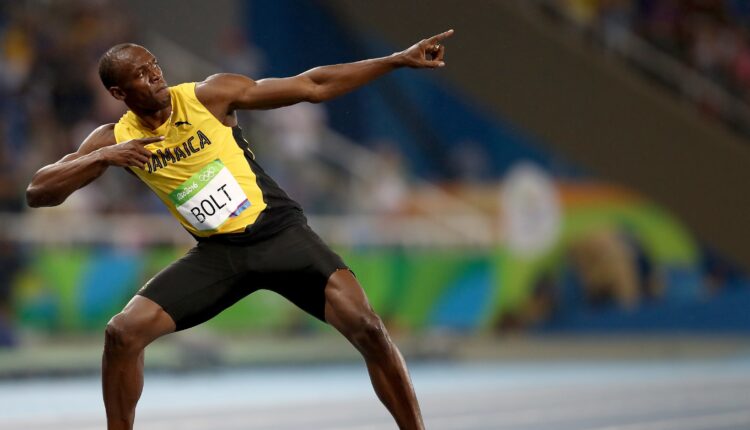 Usain Bolt is a Jamaican sprinter who is widely considered the fastest human on the planet. He is the proud owner of eight Olympic golds and 19 Guinness World Records. Usain Bolt has a net worth of $90 million.

A lot of training goes into Bolt being able to run one hundred meters in such an incredible time. His world record time is 9.58 seconds. Go ahead and try and beat that!   Here we can learn some of the most legendary success lessons from Usain Bolt’s success over the years:

1. Focus on Your Goals & Make Them Real
By stating your goals to others, they become an actual target. Many people are scared to admit their goals and want to their friends and family, in case they share disbelief about them.

Bolt told everyone he’d be the great sprinter in the world, and he’s proved exactly that all in good time. Don’t be afraid to state your dreams to the world.  In your mind, this will help to make them physically real, and inspire you much more to accomplish them. “I told you all I was going to be #1, and I did just that.” – Usain Bolt

2. You MUST Want it More than the Competition
Everybody is in the same position, In terms of a 100M sprint. They begin at zero and end at one hundred. Your level of want will decide how hard you train, and how hard you run during the day.

Therefore, to beat anyone else, the most effective way to do it is to want it more than they do, and therefore to work harder for it.
In other factors of life, we don’t all automatically get the same starting positions as you do on the track. We often begin at the back of the people who have the same goals as us. The best way to get ahead is to use your desire to drive you further. “Those seven guys behind you in that lane, they want it as much as you want it. So you have to want it more. This is why you train harder.” – Usain Bolt

3. Don’t Be Afraid of Anybody Else
It may be easy to become intimidated by other people. This may be for a bunch of other reasons. Maybe they’re already #1 and you’re after their spot. Perhaps they’re hating you from the sidelines.

Whatever it is, if you let people instill fear in you, it’ll have a bad impact on your overall performance. When you let people get to you, it changes the way you think about yourself, how tough you work for something, and ultimately the level of success you obtain with it.
Usain Bolt said he never dodged anybody, no matter who they were. It didn’t stop him from focusing completely on his goals. “Afraid? When people say that, I laugh. I’ve been in the sport for years and never dodged anybody.” – Usain Bolt

4. It Doesn’t Matter Where You Start, As Long As You Finish Strong
There the thing I noticed about Usain’s run in the 100M final this year, is that he started slowly. After the first 20 meters or so, he’s as close to the back of the pack. If you check a lot of his other runs, a pattern emerges. Bolt finishes strong…

This brings this lesson to mind, no matter what your beginning position is, or what the odds appear like at the beginning, keep your focus on the end line.  Give all of it right ’till the end, and ensure you finish strong. It’s usually possible to overtake the opposition regardless of how badly your beginning role is. “There are better starters than me, but I’m a strong finisher.” – Usain Bolt

5. Regardless of Whether You Improve, the World Around You Will
This lesson is seriously powerful… What we have to understand is that even if we stop moving, and enhancing, the world still turns. If you begin to slow down, don’t expect the world to slow down for you.

People will still be out there hard working, training, improving, and getting ready to take your place.  Bolt said that every year he kept training and trying to improve to keep winning because his competitors are doing the same thing. If he stops training, they’ll soon overtake him. No Doubt about it. “I always had to keep improving my skills in order to stay competitive and keep winning.” – Usain Bolt

6. Use Both Support & Hate As Motivation
It’s great to have loyal followers that help and inspire you. That’s always a great feeling. However, that’s not the only motivation that can come from other people. Most people would think that dislike is demoralizing, demotivating, depressing…  But it all depends on how you take it… Here’s what Bolt does:

He makes use of the hate as motivation so that he can prove them wrong. So when they said he couldn’t do it, that only pushed him to work harder, in order to show them, they are wrong. That right there is a quite great feeling in itself! “I’d like to say to all my fans out there, thanks for all the support. And to all my doubters, thank you very a lot because you guys have also pushed me.” – Usain Bolt

7. Personality Is Never to Be Forgotten
Personality is such an amazing thing and putting apart all of the technical stuff about winning, training, and motivating, personality is what makes people unique. It’s the things that make people fall in love with someone…

If you watch the Olympics, and you noticed that 100M sprints, it’s not just speed that separates Bolt from the rest of the athletes. It’s his personality. Bolt is usually smiling, waving, and showing who he is.   That in itself, helps people to get behind him and help him, instead of other athletes. Don’t neglect personality, because at the end of the day it’s not just talent and skill that wins people over. “When people see your personality come out, they feel so good, like they actually know who you are.” – Usain Bolt