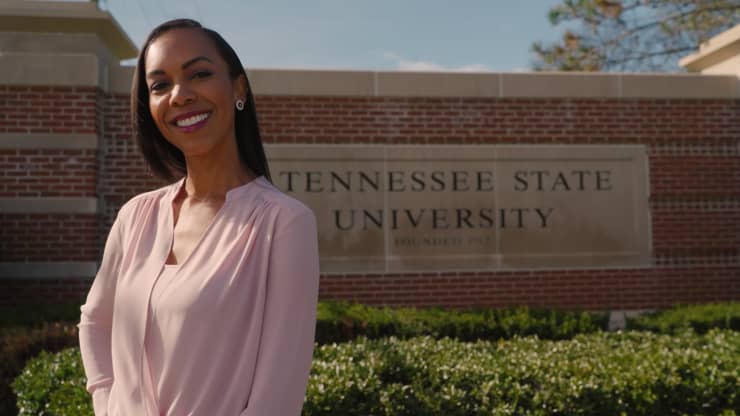 When Lakisha Simmons retired in May 2021, it wasn’t just the end of her professorial career, it was also the first time she had stopped working since she was 14.

The 41-year-old mother of two says she always considered having a job to be a matter of financial security. Watching family members work with their hands doing “cleaning jobs, janitorial jobs, nanny jobs” instilled in her a strong work ethic, she says.

For the past decade, Simmons has worked in academia, most recently as an associate professor at Nashville’s Belmont University. In 2020, she earned $150,000 between her salary and side hustles. But last spring, Simmons retired after accumulating $850,000 in investments.

Though her journey toward FIRE — which stands for “financial independence, retire early” — had been in the works since she decided in 2017 that she wanted to retire by 45, Simmons had a hard time allowing herself to step away from her work.

“I was nervous about quitting my full-time job,” she says. “I had so much anxiety around it because all I’ve known is how to work.”   But now several months into her retirement, Simmons isn’t looking back.

Sacrifice as a FIRE strategy
Simmons went through a divorce in 2017 — a process that she called “devastating” but which also made her reevaluate her finances and decide to retire early. “When I learned about FIRE, it completely changed my perspective,” she says. “I was exposed to this idea that [if you] save and invest more than the status quo then you can have all the time in the world to enjoy and  pursue your passions because you don’t have to work for someone else.”

To save up enough to be able to retire early, Simmons’ first move was to find ways to cut down her expenses. She quickly realized that “the elephant in the room” was the $2,400 monthly mortgage on her five-bedroom, four-bathroom house, so she decided to sell the home and move into a two-bedroom apartment with her kids.

Simmons also switched to a prepaid cell phone plan, got rid of cable, and started making more meals at home.    Though at first, she had a hard time finding places to cut her spending, it became easier over time, she says. “I always tell people, even if you cut something out of your budget, it’s not as if you can’t ever put it back,” she says. “If you realize that you miss something, then add it back for sure.”

During her first year of saving, Simmons managed to put $100,000 into her investment accounts. From there, she saw her money grow quickly. “It wasn’t just doubling, it was almost tripling every year. I couldn’t believe it,” she says. “That made me inspired to keep investing more.”

Simmons keeps more than 50% of her investment portfolio in an S&P 500 index fund, around 25% of her money in a total stock market index, and the rest in a mix of bonds and “some individual stocks in companies like Apple and Amazon,” she says. Simmons says that she never felt “deprived” of anything she wanted. She made sure to always set aside money to travel with her children “because that’s what I value.”

Though her original plan was to retire when she had saved up $1 million, Simmons decided to leave her job at the end of the 2021 spring semester in part because she was burnt out by teaching remotely while also homeschooling her children and because she felt the money she had saved up was enough.

Even though she doesn’t need to report to work every day, Simmons likes to keep herself busy. She starts her mornings around 6:30 a.m. to get her children ready for school before heading off to the gym.

Simmons also makes time to enjoy her new lifestyle.    “I do make time to go to lunch with girlfriends,” she says. “I like to do other hobbies like painting. I like to try new recipes and books.” She then takes time to work on her side hustles, which include a financial coaching service and an Etsy shop. Combined, her side hustles bring in between $1,000 and $3,000 in revenue depending on the month.

She says that teaching people about finances helps her scratch the same itch that being a professor did. “I’ve always been a master of my money and figuring out my goals and doing the research to make those goals happen,” she says. “But just recently I started helping others because I realized what good is it if I’m getting ahead                              financially and building wealth but my own family and friends aren’t able to build wealth too?”