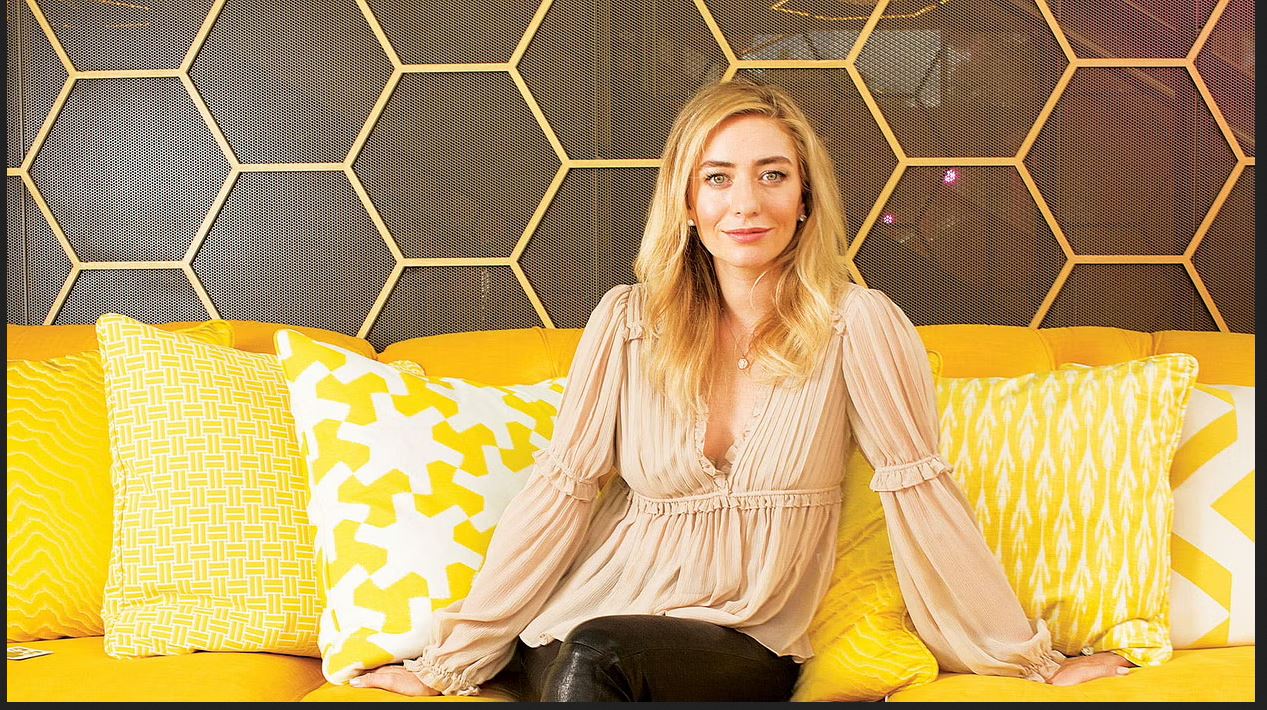 Whitney Wolfe Herd Even during the Internet’s early years, dating websites have always been famous. Fast forward to today, even though millions of people still find potential companions through these traditional dating websites, an excellent chunk of singles has already shifted to using dating apps.

Two of the most famous dating apps, Tinder and Bumble, have a combined seventy-seven million active users withinside the U.S. The numbers are fantastic for these two apps.

However, what’s more, fantastic is that there is one person that was highly involved in the development of the two dating platforms: Whitney Wolfe Herd. At only 32 years old, she has launched businesses and is already one of the wealthiest woman entrepreneurs on the planet.

Childhood:—
Whitney Wolfe Herd was born in Salt Lake City, Utah, United States, on July 1, 1989. Her father, Michael Wolfe, was a property developer, while her mother, Kelly, was a homemaker.She moved to Paris, France, in fourth grade but returned to the U.S. to finish her college education.

Education:—
Herd previously attended the Judge Memorial Catholic School before moving to France. In college, she enrolled in the Southern Methodist University in Dallas County, Texas, and majored in international studies. She was also a member of the Kappa Kappa Gamma sorority.

Around the same time, Herd sold bamboo tote bags as part of charity for those affected by the BP oil spill in 2010. She then partnered with celebrity stylist Patrick Aufdenkamp to launch a non-profit called the “Help Us Project.” After the Help Us Project’s success, Herd and Aufdenkamp launched another non-profit business called “Tender Heart,” a clothing line that helped raise awareness for human trafficking and fair trade.

Herd gained national recognition for her tote bags, also worn by celebrities Rachel Zoe and Nicole Richie. After graduating, she traveled to Southeast Asia to work with various orphanages.

Tinder Executive:—
After returning from her charity work, Herd worked in tech startup Hatch Labs where she was involved in developing a fintech platform called Cardiff and Tinder’s prototype Matchbox. After Cardify was abandoned, she joined former Cardify colleagues Sean Rad, Justin Mateen, and Jonathan Badeen, who were now focused on developing Matchbox in the 2012 IAC startup incubator.

A few months later, Matchbox was renamed Tinder, and the app was officially launched. Herd was promoted as the company’s vice president of marketing. Herd would work in Tinder for two years, and of her many achievements, nothing would be more significant than being the person who named the company and designed Tinder’s flame logo.

According to Herd, she drew inspiration from an actual “tinder,” a combustible material used to start a fire. The flame also represents emotion, passion, and desire. Tinder’s unique features, connecting potential partners through photos and short bios, became an instant hit. It was launched in less than a year, and Tinder became one of the top 25 social networking apps.

It also became the first dating app in 10 years to fall in the top 5 of the web’s most utilized services. Despite Tinder’s fast trajectory, it did not end up well for Herd with the company she helped build. In early 2014, she stepped down and filed sexual harassment and discrimination charges against company executives. She reported receiving more than $1 million-plus stock as a settlement.

Bumble Co-founder and CEO:—
Although Herd did not intend to leave Tinder, a new opportunity would open up for the young entrepreneur. After news broke out of her resignation, she was contacted by Badoo founder Andrey Andreev to develop a dating app similar to Tinder. Andreev had been running Badoo since 2006, with the app already becoming one of the world’s largest dating networks. Andreev and Herd formed a partnership, and Bumble was launched in December 2014.

Andreev initially invested $10 million in the company and took 80% ownership, while Herd controlled 20% while being named Bumble’s first-ever CEO. In other words, Andreev was initially listed as Bumble’s founder, while Herd was the company’s co-founder and CEO.

The Bumble date app functions similarly to Tinder, where users connect with other people through photos and short bios. But unlike Tinder, Bumble is a female-focused dating app that lets women make the first move. Herd states, “Bumble empowers women by making the first move, resulting in a more balanced and mutually respectful relationship dynamic from the start.”

Despite early skepticism, the app eventually found its footing and attracted hundreds of users daily. By 2017, more than 22 million users were now using Bumble. With Bumble’s popularity surging, Herd realized that more features needed to be implemented so that it could differentiate itself from competitors, especially Tinder.

The app soon introduced Bumble BFF for users looking to expand their social circle and Bumble Bizz for users looking for networking opportunities similar to LinkedIn. As of 2020, over 100 million users have signed up with the app, with 42 million monthly active users. The company’s valuation also soared to nearly $8 billion after it went public in February 2021, with the Bumble IPO selling $76 per share on its first day of trading (up 77%) in the U.S. stock market.

Herd is no stranger to failures. Her rough patch at Tinder could have easily been a career-ending moment for other individuals. Still, she managed to fight through complex challenges and has now become the CEO of her own company.  “Anybody can rebuild themselves just starting over, taking that first step, making the first move,” Herd said in a recent interview.

After Bumble went public, she became the youngest self-made billionaire in the world and is only listed behind Susan Wojcicki (YouTube), Lisa Su (AMD), Lynsi Snyder (In-N-Out Burger), and Marillyn Hewson (Lockheed Martin) in terms of net worth for female CEOs. She was also listed in the 2018 Forbes Magazine 30 Under 30 and the 2018 Time 100 lists.

Personal Life:—
Herd met her husband, Michael, while on a snowboarding journey in Aspen, Colorado. Michael Herd is the grandson of Bob Herd, the founding father of Texas-based oil and natural gas company Herd Producing Company, Inc. He is presently the organization’s vice-chairman, which operates over four hundred oil wells across Louisiana and East Texas. They married in 2017 and announced the birth of their first baby years later.

As Bumble’s fee keeps rising, Whitney Wolfe Herd will continue to be an inspiration for women entrepreneurs and people intending to overcome complex challenges.