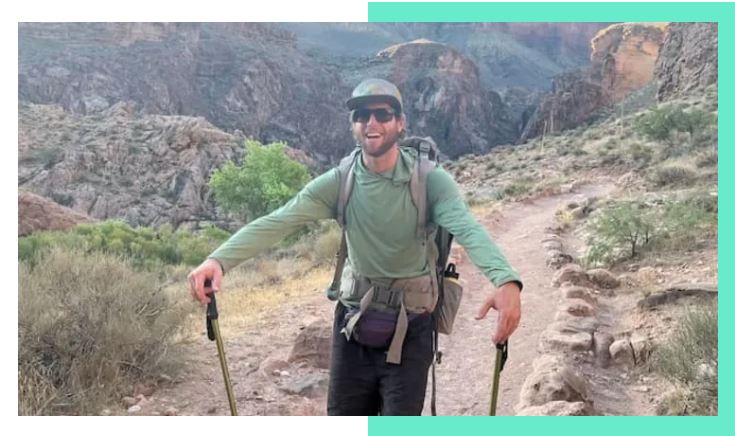 In 2011, Louis Herron dropped out of Ball State University, packed a backpack, and moved west. Restless for outdoor adventure, the Indianapolis native picked up a job washing dishes at a restaurant near Yosemite National Park. He worked his way up to employee recreation, guiding hikes for park employees.

After a few months, he nabbed a similar role at Glacier National Park before settling in Flagstaff, Arizona, outside the Grand Canyon. Herron spent $2,400 for an acre of land that would eventually host two tiny homes, his Grand Canyon touring business, and a side hustle he shared with his ex-partner: a 16-foot yurt listed on Airbnb.

In August 2020, Herron and his ex-partner spent $15,000 to build the yurt and furnish it with amenities, including a compost toilet and water pump sink, he says. In the last year, the yurt brought in $27,600 through rentals alone, according to documents reviewed by CNBC Make It. The yurt paid for itself within a year, Herron says.

“I wasn’t keen on [renting out property] because my idea for the land was, ‘This is going to be my quiet little island,’” Herron, 31, tells CNBC Make It. “But I wanted an extra source of income without having to pick up a nine-to-five or commute anywhere.”

According to Airbnb’s site, the yurt is typically booked two months in advance. It’s not available 365 days per year: Cleaning and maintaining the rental outside of booking hours can eat up 30 hours per week, Herron says. Here’s how Herron juggled the side hustle with his off-the-grid Grand Canyon business last year:

A bare-bones experience
The first time Herron stayed in a yurt at a ski resort outside Flagstaff, he recognized the circular structure’s “unique energy.” He mimicked that yurt’s skylight when he and his ex-partner built their own so renters could see the stars.

Building the yurt involved more manual labor than Herron expected. His ex-partner bought the materials online in 2020 for $8,000. Herron spent $4,000 building a wooden platform and $3,000 reinforcing the structure: Because of Flagstaff’s powerful wind gusts, he wanted the yurt to withstand winds up to 200 miles per hour.

The yurt doesn’t have plumbing. Neither does Herron’s two homes on the property. Herron says he keeps a constant eye on his water supply, so he and guests can drink water, wash dishes, shower, and use the toilet on site. ″It’s not as hard as it seems. It just takes thinking outside of the box,” he says.

When Herron doesn’t get enough rainwater, he drives five miles to a nearby community well and fills up a 200-gallon tank in his truck. It takes him almost an entire day to cart the water back, but he says the supply lasts him and his guests up to four months. “I could get it delivered, but it costs twice as much, and I enjoy the process,” he says. “It becomes a little meditative for me, making you respect and conserves water much more.”

‘A dream come true — with a few conditions
Throughout 2021, the rental directly fed into Herron’s small touring business, The Desert Hiking Company: Guests could book Grand Canyon hikes at discounted rates. The company earned Herron and his ex-partner up to $40,000 per year, but it was deeply reliant on customer tips — which meant the yurt was a perfect way to sustain income and desert lifestyle, he says.

“It’s been a dream come true to host people on the land, then wake up early with them and show them the canyon and take them on a hike,” Herron says. “To give them a packaged experience led by a local passionate about the area.” Harsh realities accompany that dream: Covid-19 restrictions have made park traffic unpredictable, and almost every guest in the yurt needs a tutorial on living off the grid, Herron says.

Herron also no longer owns this particular yurt: He and his ex-partner broke up in February, and she took ownership of the rental property. As of late September, its Airbnb listing appears offline, but Herron says he’d like to replicate the experience by building a new one — or more.

“I definitely would like to upscale, but I only want to grow this vision on a sustainable level,” he says. “I have neighbors who have four, five or six Airbnbs on their property, and I see the stress it brings — and how the quality of care starts to fall through the cracks.”

For Herron, I am upscaling means multiple yurts, installing plumbing, and buying more land. He says he finds that expansion process bittersweet. “I’m a reserved, conservative person, and I like to keep things simple and small and sustainable,” he says. “Given the opportunity, I’ll capitalize, and I’d love to see more yurts out here. It’s just a matter of having time and money to invest.”