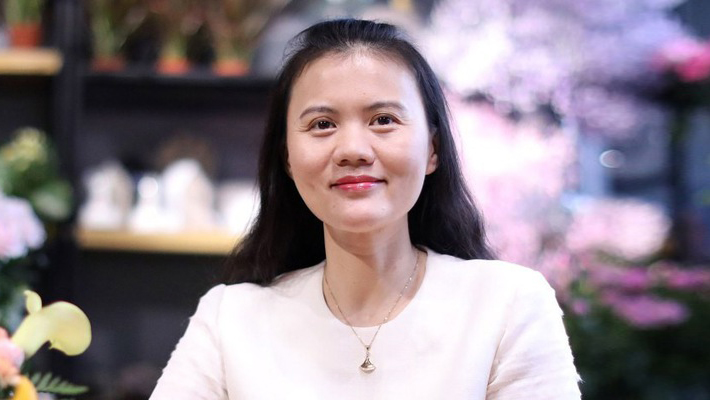 One of Asia’s most powerful and influential women, Lucy is the Board Member, Founder, and Head of Program Advisory Committee of Hupan Modou Foundation, and Executive Chairwoman of Lazada Group, a prominent Partner of Alibaba Group. She is responsible for propelling Lazada’s expansion as a fundamental part of Alibaba’s ecosystem.

Before Lazada, Ms. Lucy was the Executive Chairman and Chief Executive Officer of Ant Financial Services Group. As one of the co-founders of Alibaba Group, she had led several business units within the company including services and marketing divisions, and had also occupied the position of Chief People Officer of Alibaba Group.

Before becoming a part of Alibaba, Lucy had the career of a teacher for five years, teaching at the Zhejiang University of Finance and Economics after earning her bachelor’s degree from Zhejiang Gongshang University in 1994. She was named Tatler Singapore 300 in 2018 and was listed on Forbes 100 most powerful women in the world list for four successive years from 2013. She led various welfare and charitable programs during her time at Ant Financial and also with Alibaba Group.

In Lazada, she was a devoted supporter of gender equality and worked towards boosting economic opportunities for women in Asia by signing the IFC-led Digital2Equal initiative. She continues to dedicate her time and efforts to helping deprived children in rural China, while also doing wonders in the business world to retain her spot as one of the world’s richest self-made women billionaires.

Early Life: Childhood & Education:—
Best known as Lucy Peng, Peng Lei was born in the year born 1972 in Hangzhou, China.  She attended the Hangzhou Institute of Commerce at the Zhejiang Gongshang University. She graduated from the institution in the year 1994 having obtained a bachelor’s degree in business administration.

Professional Life:
With the degree in business administration she earned from Hangzhou Institute of Commerce, which is now known as Zhejiang Gongshang University, Lucy found employment as a teacher at the Zhejiang University of Finance and Economics. She worked here for five years until she got married to a businessman who co-founded Alibaba with Jack Ma in September 1999. Lucy and her husband were one of the many married couple teams making up the percentage of women among      Alibaba’s founding partners that the e-commerce company would later become commended for.

As a part of the company, one of Lucy’s early responsibilities with Alibaba involved managing the company’s HR department, which she created. During this time, one of her remarkable accomplishments was    the development of the “mom and pop” model at the Chinese e-commerce outfit, in which one pop handled performance assessments, while one “mom” focused on teamwork and incentive.

Alibaba Co-Founder, Lucy Peng:—
Lucy Peng served as the chief executive officer of Alipay from January 2010 to February 2013 and led the business to be known as China’s most successful payment gateway, expanding to more than 800 million users with a value of about $60 billion as of the end of 2014.

In March 2013, she took over as the chief executive officer of Alibaba Small & Micro Financial Services, and in this position, she achieved significant headway in searching for improvements in the mobile payments system. Her name was frequently circulated by the Chinese media as a candidate for Alibaba’s next chief executive officer during that time. However, the job was given to another executive.

In September 2015, nearly one year after Lucy founded Ant Financial Services Group, Alibaba and Ant Financial took a combined 40 percent stake in Paytm, a noteworthy Indian mobile wallet operator, and Lucy Peng was placed as a member of its director’s board. A year later, Ant Financial broke set a record as it became the largest private fundraising in the world founded for an internet company, valued at $4.5 billion. This placed the company at an estimated $60 billion valuation.

During her time at Alibaba, Lucy also served as chief people officer, the principal human resources officer for over 10 years. In this position, she supervised roughly 35,000 employees under Alibaba. Lucy Peng became a billionaire in 2014 before Alibaba’s record-setting IPO. Following the IPO’s suspension and Jack Ma’s subsequent disengaging from public appearance, Lucy unexpectedly replaced him on several roles including at the 2019 finale of Africa’s Business Heroes.

Achievements: Awards & Honors
Lucy was named Tatler Singapore 300 in 2018 and was listed on Forbes 100 most powerful women in the world list for four successive years from 2013. In 2015, Fortune named her the 11th Most Powerful Woman in Asia while Wealth-X named her the third-wealthiest woman in the tech sector.
In 2016, Forbes ranked her as the 35th most powerful woman in the world and also as number 35 on their list of Power Women. Under that same year, she was also listed by Forbes as number 17 on their list of Asia Power Women.

Personal Life:
Three years after she started working as a teacher at Zhejiang University of Finance and Economics, Lucy Peng met Sun Tongyu whom she married almost immediately. However, she divorced him for a short while but then remarried him. Lucy was described as “a funny and down-to-earth” leader by Porter Erisman in his 2012 documentary film “Crocodile in the Yangtze” which was centered on the early years of the Alibaba Group.

Lucy Peng Net Worth:
The Chinese businesswoman, Lucy Peng, is said to have a wealth of $7 billion, a fortune she has made by being one of the founders of the renowned Alibaba Group.

Lucy is one of the world’s self-made female billionaires. She has been a driving force within the Alibaba company and has influenced many profitable management decisions in the company through leading several diverse departments in the e-commerce company and ensuring that the business, which she co-founded along with her husband, reaches great heights where it’s now enjoying the success and reputation its founders have worked for.