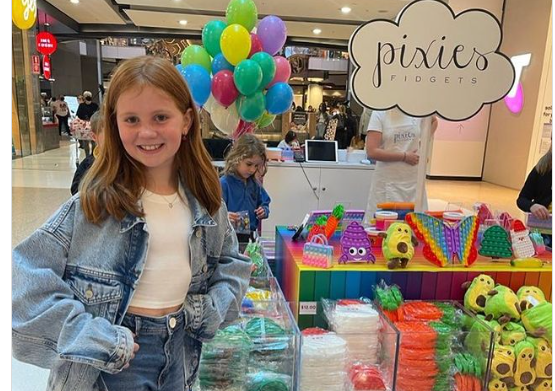 When we turned 10 years old, all we had to think about was going to school, doing homework in the afternoon, watching cartoons on TV, or playing around the house with our friends; in short, we had a carefree life made up of small pleasures, lots and lots of fun and without having any of the responsibilities of the adult world.

However, there is a child who, at the age of 10, has bigger ambitions. This juvenile has managed to become a successful entrepreneur and could, by the age of 15, even retire if she wanted to…

Her name is Pixie Curtis, and at the age of just 10, this Australian pre-teen founded a company called Pixie’s Fidgets with her mother Roxy. The company makes and sells toys for children of Pixie’s age and younger. When the business launched in   May 2021, sales skyrocketed, and the toys sold out in less than 48 hours.

This extraordinary success also owes a lot to Pixie’s mother Roxy, who is a public relations expert. But that’s not all for the little Pixie: her mother has started a second business producing a line of hair accessories called Pixie’s Bows. In less than a month, the company, Pixie’s Pix, has made a turnover of about $200,000.

Mum Roxy said that her daughter would be able to retire at the age of 15 at this rate if she wanted to (the Pixie brand pulls in a monthly total of about $100,000): “The most exciting thing for me is the entrepreneurial spirit that she has at such a young age. I never had it when I was young, even though it was always drummed into me that I had to be successful in the future.

When I was 14, I got a job at   McDonald’s because that’s what you did in my day. So, I guess the most important thing for me is her entrepreneurial drive. Yes, I have helped her, but she still has the drive, which is the most rewarding part for me!” said mom Roxy about her daughter.

For sure, this little girl has a charmed life and there’s no doubt about that! What would you do if you had the chance like Pixie to retire at the age of 15? Would you feel fulfilled or not?