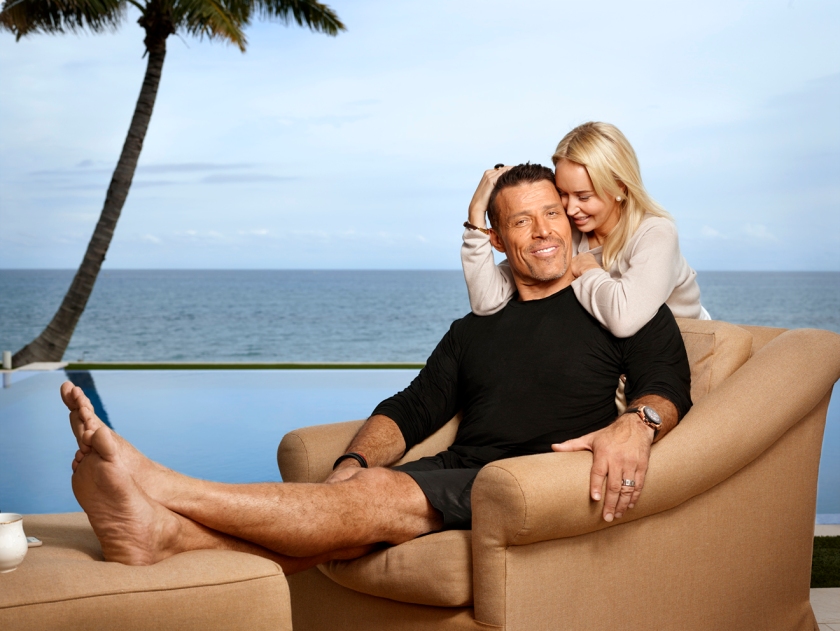 Tony Robbins is a world-renowned peak performance coach, motivational speaker, multi-millionaire business magnate, and best-selling author. He is also well known for his rock-star-like self-improvement seminar productions, his many cameos on the silver screen, a Netflix special made about him, and countless celebrity testimonies attesting to his helping them turn their lives around.

Needless to say, Robbins has made an impact on people’s lives across the world and continues to do so to this day with all his businesses. So, considering the impressive accomplishments of this phenomenal human, we will be diving into how such a legend came to be in this Tony Robbins Success Story special.

###Raised Rough:—-
Tony Robbins was born and raised in the North Hollywood California area. And his upbringing was rough to say the least. His parents divorced when he was 7 years old, and his mother would go on to get remarried four different times while he was growing up.

His mother’s unstable revolving-door relationships with men created a chaotic environment for him and his siblings. And as the oldest of three other siblings, Robbins eventually had to step up to help his siblings cope in a household led by his substance-abusing mother.

Robbins would also have to shop weekly at the grocery store for the family because his mother wouldn’t bother to do it. In addition, every day when he’d come home from school, he had to prepare meals for his siblings because no one else would. It got to the point where Robbins had to take on various jobs in his youth to keep the bills paid. Because if he didn’t, his cash-strapped home wouldn’t have continued functioning.

Amazingly, Robbins would do all of this even without a car, relying solely on public transportation to get make it to his jobs. Robbins most certainly did not grow up on an easy street. However, things would begin to change for Robbins at the age of 17. Eventually, he and his mother had a climactic blowout, ending in her kicking him out of the house. And even though Robbins ended up getting an apartment, and still hustled to support his siblings from afar, he found himself in an environment that was much less toxic.

###The Turn Around:— Tony Robbins ended up finishing high school, but did not go to college afterwards. Instead, he worked menial jobs, barely making enough to get by for a couple of years. It was at the age of 19, when Robbins would ultimately get to a point where he was overweight, in a relationship that he was not truly excited about essentially (staying in it only out of financial necessity), and feeling fed up with the way his life was turning out. But, overweight, broke, feeling unfulfilled and frustrated with his situation, Robbins finally decided to take action to turn his life around.

It was a moment where he made up his mind to take ownership of his situation. He acknowledged that his situation was no one’s fault but his own. And that the only way out of it, was for him to change and   claw his own way out. So, after learning how a friend of his father turned his life around after attending a Jim Rohn seminar, Robbins would attend one of these events as well.

It was a big deal to attend this seminar, because it cost Robbins a whole week’s worth of his income just to purchase tickets for the event. But, he took the plunge, and it ultimately revolutionized his life. Inspired by the man and his message at the Jim Rohn event, Robbins would eventually reach out to Rohn to inquire about working for him. And as luck would have it, Jim Rohn accepted.

###The Rise:— Tony Robbins would go on to help Jim Rohn sell his high-dollar seminars to aspiring achievers, executives, and powerful business professionals all across the country. Robbins ended up doing so well for Jim Rohn, that Jim eventually   took him under his wing as his protégé. And after earning Jim Rohn’s trust, he was allowed lead events for him. And it was here where Robbins would come into his own.

At the age of 26 Tony Robbins would reach millionaire status. And shortly thereafter, he would branch out to create his own individual platform selling his unique self-help message of how to create a successful life. And as they say, the rest is history, as Tony Robbins has since gone on to create successful program after program, business after business, and book and after book.

And not just any books, best-selling books like Unlimited Power, Awaken the Giant Within, and Money: Master the Game. On top of this, he’s gone on to consult power house celebrities and international leaders like Serena Williams, Leonardo DiCaprio, Oprah,    Nelson Mandela, Mikhail Gorbachev, Margaret Thatcher, Princess Diana, three U.S. presidents., and even Mother Teresa. All in all, Robbins has managed to build 30 businesses with a combined revenue of over $5 billion a year.

Success Ethos | Tony Robbins Success Story:—
Since we’ve covered most of Tony Robbins key accomplishments, we now want to leave you with the ethos that has driven him to achieve the massive levels of success and fame that he’s managed to achieve. And the great thing about Tony Robbins is, that once   he acquired success, he found more success by marketing and selling his insights on how he succeeded. In short, he’s left us with no shortage of clues for his success. And to according to our research, here are his most poignant clues:

Tony Robbins has an unmatched certainty in himself and his ability to help people. In other words, he has mastered self-confidence and his ability influence others. Another aspect of Tony Robbin’s success ethos is related to his focus on constant and never ending improvement. Robbins believes that so long as you are continually looking for ways to improve   who you are what you have to offer, there’s no way you can’t not grow and succeed as a person. And lastly, Robbins lives what he calls “The #1 Key to all success in life”, which is personal power (the ability to execute on one’s ideas).

But don’t just take our word for it, see for yourself. Here are the handful of words that Tony Robbins has uttered himself that reveal his success ethos: “If you develop the absolute sense of certainty that powerful beliefs provide, then you can get yourself to accomplish virtually anything, including those things that other people are certain are impossible.” – Tony Robbins

###Key Takeaways:—-
There you have it, the Tony Robbins success story that describes his journey of coming from a broken home, to struggling to support his siblings, to finally making the decision to become massively successful. We’ve revealed the massive success   he has managed to achieve, along with the success ethos that has guided him in creating the extraordinary life he now leads. And as a quick recap for your benefit, here they are again:

Lastly, if you enjoyed the success insights provided on this page, then you’ll love these Tony Robbins quotes. They possess some of his best advice on success and life. With that being said, we hope you you’ve gained    some insights from our Tony Robbins Success Story. May the insights give you the traction needed to unleash your own personal power and create your very own extraordinary life.